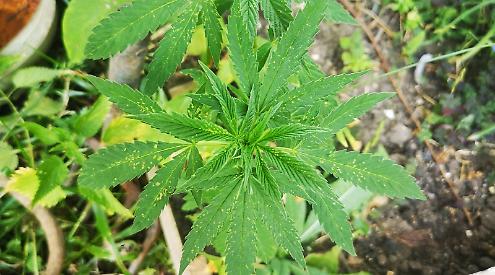 POLICE who were called to the site of a suspected cannabis farm on an island in the Thames went to the wrong place.

Officers boarded a Berkshire Fire and Rescue vessel and spent almost two hours searching The Lynch near Shiplake but found nothing.

They were supposed to alight at neighbouring Hallsmead Ait, where dozens of cannabis plants had been discovered growing in a vegetable patch.

Both islands are uninhabited. They are large, triangular-shaped and covered with trees.

Hallsmead is owned by businessman Jamie Waller, 42, who inherited the island when he bought the old Shiplake vicarage in September.

Mr Waller’s land manager, Andrew Granger, discovered the plants on Friday during an inspection of the island, which has a history of unauthorised moorings.

After failing to speak to police over the phone, he submitted an online report, which included the island’s name and exact location, using the Google map pin locator.

On Monday, about half a dozen officers from Thames Valley Police and the fire service’s animal rescue unit went to The Lynch to begin a search.

Police initially denied the operation had taken place but when presented with a photograph of the boat party on the water, they confirmed that an unsuccessful search had taken place.

Mr Granger said: “It’s just crazy as I put Hallsmead on the report and they must have got on the water at Shiplake, seen the other island and gone to it.

“The police messaged me in the afternoon to say there was nothing there so I went back to them and said, ‘I think you got the wrong island, guys’.

“I knew I should have gone with them. The guys responsible for the cannabis must be laughing having seen what went on.

“Whatever was there on our island is likely to have gone now.”

Mr Waller, 42, who founded two successful technology companies, said the island had suffered “issues” for years and he had been trying to tackle the moorings problem since he acquired it.

He said: “We had reports from time to time that people had been on there, so we put up signs.

“We go back to the island periodically just to check that no boats are moored up.”

“A doll had been left there too — it’s very strange behaviour.”He said the island hadn’t been checked for about three months but there had been incidents of people smoking cannabis in the back of vans in Church Lane, a narrow road which leads down to the river from the A4155 Reading Road near Shiplake College. These had been reported to the police.

Mr Waller, who is married with two young children, said: “It’s a big problem with the island and the road off the river.” He said the Phillimore Estate, which owns a lot of land in the area, was also aware of the issues.

Mr Waller added: “We will put up some CCTV and other devices to try to see who is going there.”

He said police went to the island on Wednesday and took the plants.