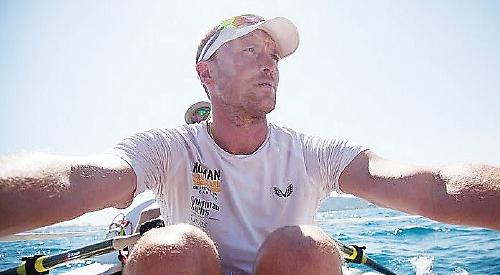 OLYMPIC champion Alex Gregory has told how he overcame seasickness and stormy waters to win a non-stop charity ocean race.

The 33-year-old rower from Ipsden was part of a five-strong crew that triumphed in the 200-mile race in the Mediterranean from Barcelona to Ibiza.

It was the first of two very different ocean rows that he is taking part in in the space of a few weeks.

Last week’s three-day event was in aid of , a charity which raises awareness of the human papilloma virus, or HPV, which affects the skin and can increase the risk of getting cancer.

Gregory, who retired from international rowing after winning gold at the 2012 and 2016 Olympics, was part of a five-strong crew that took on three other crews of amateur . Each team had a 24ft long boat equipped with two seats and a small sleeping space and the crew took it in turns to row and rest.

The crews faced blistering heat, busy shipping lanes, seasickness and high winds and rough seas which delayed the start of the race by two days.

Gregory said: “It was totally different to the racing I’m used to but everyone thought I would know everything so there was a bit of pressure on me.

“The stroke is more or less the same but it’s down to mental strength to keep going.

“We rowed for a day, then a night and another day and the conditions were really tough.

“In 24 hours of we managed to go two miles because of the strength of the headwind. It’s hard when you’re rowing and not going far. In the we had to be pulled by a safety boat.

“We were also taking medication to deal with seasickness.”

All four boats were pulled by the safety boat for 20 hours before being released for a final row of eight miles on the calmer water to Ibiza.

Gregory said: “Our crew had gone the furthest distance before we were pulled by the boat. The end was more of a sprint, which took me back to my racing days.

“Every single boat had really good people in it. None had any real rowing experience but they got involved the charity and the challenge. It was a really positive thing to be involved with.”

“As we went through the training, we learned about the charity. There were people taking part who were cancer survivors who had HPV. They were really interesting and I got a lot out of the whole thing.”

Gregory is now taking part in the Polar Row in which a team of athletes and explorers are rowing the Arctic Ocean.

He saw an advert for the challenge and thought it sounded exciting, so he volunteered.

Gregory said: “With my rowing background and the challenge that I had already signed up for I thought it was a great opportunity.

“I love being outdoors and the idea of exploration so I answered the advert and found myself on board as part of the crew.”

The expedition has been split into two sections. The first part, from Tromso in Norway to Longyearbyen on the island of Svalbard in the Arctic Ocean was completed at the weekend, putting the crew on course to set five world records.

Gregory is part of a six-strong crew for the second part of the challenge in which they will attempt to row 1,200 miles to Iceland, starting today (Friday).

They expect to arrive by the beginning of September after facing icy waters and strong, unpredictable Arctic winds along the way. It will be the longest Arctic crossing ever completed.

Gregory said: “It’s a very different type of rowing. I’ve been doing six-minute, 2km races my whole life and this is going to take 28 days.

Gregory said the hardest part of the challenge would be being away from his family — partner Emily Airey and children Jasper, seven, Daisy, three, and Jesse, one.

“My children are going to track my route using the website so they can see where I am,” he said.

“My reason for doing it and the thing driving me forward is that it is going to be tough. This is the sort of thing I want to do in the future.

“I am interested in the outdoors and exploration but I want it to be meaningful.

“I think the word inspired is used too often but people seem to enjoy being part of my achievements in the past through sport. I want to be outdoors and inspire others.”

The crew are raising money to build a school in the Himalayas.