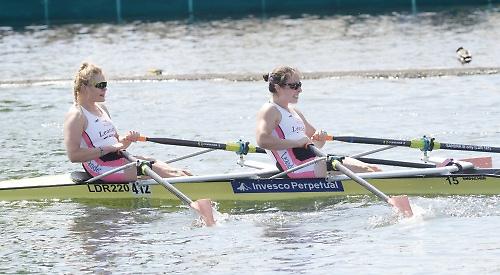 BOTH Leander and Henley Rowing Club picked up two wins each on finals day of Henley Women’s Regatta on Sunday.

The three-day event, now in its 31st year, attracted a record 441 entries with more than 1,800 athletes competing on the famous stretch of the Thames.

Leander won the women’s pairs and had an athlete in the winning championship eight boat while Henley triumphed in the J16 quadruple sculls and junior quads.

The Leander coxless pair of Laura Meridew and Natasha Harris-White won their championship event against Tideway Scullers School A in a time of five minutes, 34 seconds. Leander’s Hannah Scott helped GB U23 crew beat Yale University A by half-a-length to win the championship eight title.

In the double sculls final Leander’s Katherine Maitland and Anna Porteous lost out to a composite Edinburgh University/Univesity of London crew.

For the J16 coxed four of Millie Guida, Phoebe Snowden, Amber Weller, Amy Howard and cox Madison Sturgess, this meant a first round race against Emanuel School. This was a fiercely fought race with Emanuel taking any early lead, Henley rowing through them at halfway only to see Emanuel regain the lead in the last few hundred metres to end the Henley girls’ hopes of progressing in the regatta.

The J16 quad of Hannah Hills, Charlotte Rowley, Carla Russell and Georgie Brown set a new record as they won their event. The Henley quad drew Canford School in the first round and had a comfortable four-and-a-half length victory. In the semi-final they overcame Surbiton High School with a two-and-a-half length victory to take them to the final against Marlow.

The final was closely fought with Henley edging a lead to get out to about a length but never quite shaking Marlow off and Marlow pushed back in the last few hundred metres to reduce the Henley winning margin to half-a-length in a record time of five minutes and three seconds.

In the junior events (under 18) racing started with time trials on Saturday morning, the four having to qualify 16 out of 18, the quad 16 out of 25 and the single 16 out of 17. All three Henley crews qualified.

Maddie Pollard in her single had a first round win against Lindo of Twickenham Rowing Club but in the second round came up against the favourite and eventual winner Pooley of Agecroft.

The coxed four of Grace Johnson, Daisy Butterworth, Mary Wright, Phoebe Fletcher and cox Ella Nolson had a comfortable first round victory of four-and-a-half lengths against Sir William Borlase and an even more comfortable second round victory over Marlow who did not make it to the start having being disqualified for illegal substitutions. The semi-final saw the Henley beat Headington School to secure a place in the final against Putney High School where Henley lost by three-quarters of a length.

The junior quad did not have the best preparation with Sophia Hahn only arriving back in the UK on Friday having spent time trialling for the American junior team in the USA.

Saturday afternoon saw the Henley quad of Lottie Orr, Hahn, Georgie Robinson Ranger and Issy Jonsson have a comfortable victory over Shrewsbury School. Henley had a scare first thing Sunday morning against Latymer B as their boat hit the booms to let Latymer take the lead which Henley did not recover until the Barrier but continued to move away to win by one-and-a-quarter lengths. In the semi-final against Headington Henley got off to a flying start to take an early lead which they built on to win by one-and-a-half lengths.

In the final Henley took an early lead against Latymer A. Latymer pushed Henley back with the crews overlapping throughout the race. Henley eventually held on to win by three-quarters of a length.

GB Olympic cox Zoe De Toledo, who had been commentating on the regatta, gave out the trophies at the prizegiving ceremony at the end of the day.

Speaking after the successful regatta, chairman Miram Luke said: “This year’s event has been outstanding. Once again we were fortunate with the fine weather and rowing conditions. It was good to see the trophies shared around with local clubs winning several events and a strong overseas entry performing well.

“We were delighted to have had so much good feedback from coaches and competitors from home and abroad regarding the organising of the event and the new restructuring of the regatta that took place this year.

“We were also grateful to the town council who funded two new pontoons. These will now be used by Henley Rowing Club.”