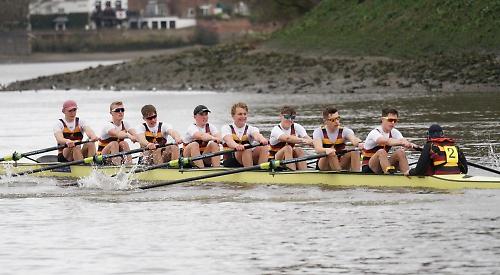 THE first eight crew of Shiplake College broke the championship course record on their way to winning the Schools’ Head of the River Race on Friday of last week.

The win means they are the fastest school crew currently in Great Britain over a long course. The crew of Sydney Burnand, Rhys Ash, Dom Brown, Sebastian Hjortland-Marks, Richard Adams, Tom Boret, Ben Brockway and Marcus Brown,with Jacob Kirby as cox paced themselves perfectly despite the cox losing connection to the speakers in the boat.

There was also success for Shiplake girls Sophia Hahn and Ella Nolson representing Henley Rowing Club, as they won the girls’ championship eight. Their boat finished the course in a time of 18 minutes, 44 seconds.

Speaking after the races, Shiplake director of rowing Dave Currie said: “I am delighted with the results on Friday and would like to congratulate Mr Mackworth-Praed (first eight coach) and Mr Lee (second eight coach) for their hard work.

“These results have been built over a few years of hard work from the staff at the boat club and the support from the school. It really has been a team effort.”

Headmaster Gregg Davies added: “It’s great to see that the passion of the coaches for their crews to succeed has been borne out. I think we can now begin to believe that we are here to stay amongst the elite of schools’ rowing. I couldn’t ask for a better leaving present.”