Rowers put through their paces in virus lockdown 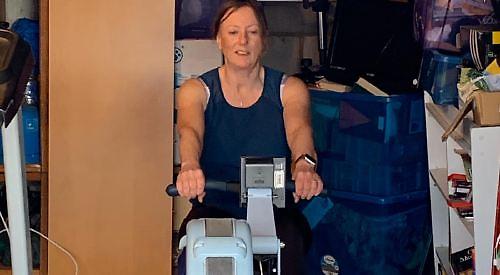 MEMBERS of Henley Rowing Club are keeping active and trying to avoid boredom during the coronavirus lockdown.

Junior, senior and masters coaches have created new training programmes for the rowers which they deliver online by video.

The club has loaned weights and indoor rowing machines to members, while others have been running and cycling to stay fit as they are unable to train on the River Thames.

Club chairwoman Helen Turnell said: “The bank holiday would have been our first regatta of the season and that really brings it home that it is not happening.

“Before the lockdown, we reduced the number of people who could train and increased our cleaning. Then we limited outings to single boats to increase social distancing and then we closed when the Government and British Rowing made the announcement to cease all rowing activities.

“Some of our members are in the vulnerable category and we have had a number who have had coronavirus symptoms and been ill.”

Turnell, who lives in Greys Road with her husband Phil, has been a member at Henley for eight years and chairwoman for a year. She said the members had responded well to the lockdown and praised the creativity of coaches.

She said: “It is important that they keep their fitness going so that they can hit the new season. We are working in a competitive way to do competitions against other clubs to keep the motivation going. It is so hard because rowing is such a social sport and also a team sport.

“We haven’t managed to get out on the water very much this year anyway with all the bad weather and the flooding and members will be feeling like they haven’t rowed properly since October.

“The water is absolutely beautiful at the moment, so it is a little bit heartbreaking.

“We’re all missing the buzz of a busy club and the pleasure of boats on the water but I’d like to thank our coaches and members for rising to the challenge of training in isolation, keeping us fit and healthy until we can get back on the river.”

Turnell, who is business manager at Crazies Hill Primary School, added: “Whenever we get the go-ahead from the Government, we will be out on the water having a big party.”

Turnell is part of the masters’ squad, which beat Walbrook Rowing Club in Twickenham by travelling the equivalent distance of the Atlantic Ocean (4,934km) by cycling, running, walking and using an indoor rowing machine.

Their next challenge is a race to Tokyo, which was created by members Janet Dutton and John Crawford.

Dutton said: “The main reason most rowers train is to race — we are a competitive bunch.

“With outdoor racing cancelled for now, we created our own virtual race. It’s had an enthusiastic response from the squad as it creates purpose and motivation for solo training.”

Henley will race against Walbrook, Gloucester, Derby and Henley rivals Upper Thames in the challenge.

The 16-year olds in the junior women’s squad have a group challenge to circumnavigate the globe, with 40,000km completed to date.

The rest of the squad continue to follow their usual training programme of weights, indoor rowing and circuits during the week and have team or individual challenges at weekends.

Steve Brown, coach of the junior women’s squad, said: “From the start of lockdown we have tried to keep cohesion in the squad, with set circuit training, pairs training via WhatsApp and setting goals to keep their competitiveness.”

Karima Erbolat won a challenge to see who could run 8km the fastest and beat her coach in the process.

Six teams of three ran a relay over 1,500m and this was won by Gabby Chaplin, Georgia Catlin and Lucy Jones.

The junior 17/18 and under 20s completed a challenge against Tideway Scullers junior boys’ squad, split into runners and road bikes, with the runners covering 5km and the cyclists 30km.

The junior women’s squad will do the same challenge with their peers at Tideway Scullers and the senior women’s squad are clocking up the ergo meters to meet their target of reaching the Romanian capital of Bucharest (2,143km).

Trustees are managing the club site, which is off Wargrave Road, and must give permission before members can access the boating area, boathouses, clubhouse, gyms and changing rooms.