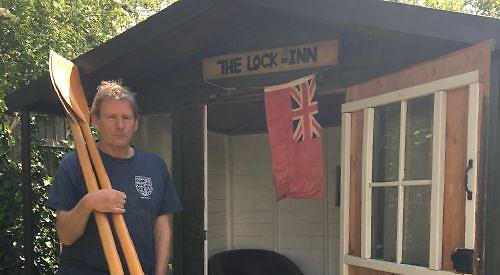 THE chairman of Upper Thames Rowing Club wants to see his athletes back on the water as soon as is safely possible.

Justin Sutherland believes it is possible to have club members out in single sculls after the Government announced an easing of its lockdown restrictions.

This has allowed for unlimited exercise outdoors and sports such as tennis, golf and open water swimming.

Sutherland said the club, which was founded by his father, Peter, will be guided by British Rowing and the Environment Agency.

He said: “We are going to operate very strict social distancing rules where you can’t go within 10ft of another person, rather than the advised 6ft.

“While out on the river, you need to keep two boat lengths apart at all times. There will be no crew rowing, only single sculls, and nobody will be able to go into the clubhouse.”

In the meantime, the club has ensured that the club’s top athletes have all the equipment they need to be able to keep up their fitness levels at home.

Sutherland says: “The main squads have taken home the best equipment and are maintaining their fitness remotely under the guidance of club captain Stewart Bell.”

Other members have also been keeping themselves busy and some have taken part in virtual endurance racing with others clubs, including Henley Rowing Club.

Tim Davies has set himself a goal of completing one million metres on a Concept 2 rowing machine by the end of June.

Helen Mangan, current indoor rowing world champion and senior NHS manager, says regular running is “a great way to start the day before the mayhem of work” while Jamie Elwin has kept up his routine of rowing at 8am every Saturday but on the ergo.

Joy Skipper says: “I am training with ex-GB rower Tony Larkman on Zoom and then I run some sessions for Goring Gap Boat Club. I’m also cycling to the allotment every other day to dig for victory.”

Nick French says: “I have a regimented weekly schedule which involves running very early in the mornings and admiring just how flat and clear the river is. God, it’s torture — a clear sky and no inbound flights to Heathrow.

“I’ve also fallen in love my with road bike again, doing 120km over weekends but, honestly, I miss everyone and hope we can get back on the water in sculling boats soon.”

Veteran rower Tim Meikle says: “I’ve attempted to replicate the ambiance of the rowing club by converting my summer house into a pub, which is called the Lock Inn.”

Sutherland says sports clubs have an important role to play from a physical, mental and social standing.

He said: “Many of the members are missing other people and recognise that sports clubs have an important part to play in people’s everyday lives.

“People join sports clubs for lots of different reasons and when lockdown first kicked in I thought I was an extrovert but now I think I am an introvert but life has started to drag a bit in the last couple of weeks and we are all desperate to get back out on the water.”

He added: “We want to do what we can in order to make that happen while being sensible and abiding by the rules.”