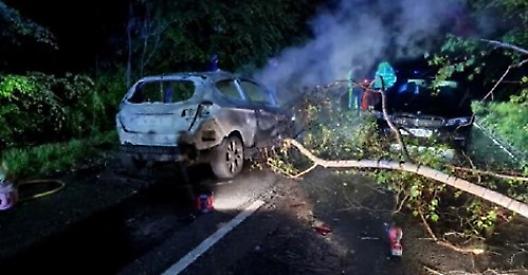 AN Olympic rower had to run for her life seconds before a car collided with another vehicle and caught fire near Henley.

Vicky Thornley was being driven home to Bix by her husband Ric Egington on Sunday when the incident happened on the A4130 near Catslip at about 9.15pm.

Mr Egington, who was driving towards Henley, had stopped because there was a fallen branch in the road and another driver coming the other way had stopped on the other side of the obstruction.

They all got out of their cars and were trying to move the tree when a third car coming from Henley skidded and collided with the other stationary car.

The driver of the third car, believed to be a Hyundai, got out before it burst into flames.

A crew from Henley fire station attended the scene to tackle the blaze and the moved the tree. Police arrived and arrested a 22-year-old man from Didcot on suspicion of driving over the permitted alcohol limit.

Thornley was being driven home from Heathrow airport by her husband, a former rower, after competing at the world cup in Switzerland at the weeked when they stopped in the road.

She said: “We didn’t know what to do as turning around in the road wasn’t a safe thing to do so we thought we would try to move the branch. Rick put his hazard lights on and we and the driver of the other vehicle got out and tried to move it.” The Leander and GB rower then noticed the third vehicle driving towards them from Henley.

She said: “I was pretty scared at that point as we didn’t know if he would go into the car or veer off so we ran into the forest. There was a large bang. I’ve never been in the close vicinity of a crash before and the sound wasn’t pleasant. The driver was okay and he got out of the vehicle but we could see it had started to smoke and then it caught fire.”

Thornley and Mr Egington called the police. Mr Egington’s BMW was damaged by the heat of the fire.

Thornley, who is originally from Wrexham, said: “The front had melted and had a dent but it was okay to drive. I went home and had a sugary cup of tea and was fine.”

A 33-year-old man from Wallingford was also arrested on suspicion of using a motor vehicle without third party insurance.

He was also released under investigation.