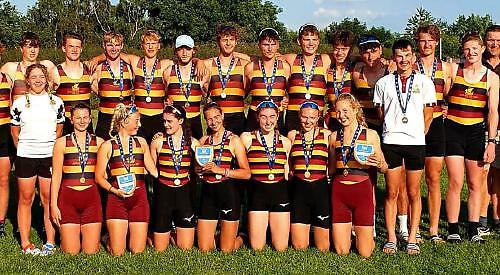 HENLEY Rowing Club won the Victor Ludorum Trophy as the most successful club at the British Rowing Junior Championships held at the National Water Sports Centre in Nottingham last weekend.

Henley won the accolade with 47 points with Marlow runners-up on 33 and Shiplake College — who won three golds and a silver from their seven entries — third on 31.

More than 1,500 competitors from 115 clubs took part in the three-day competition.

The J15s raced Friday, J16s Saturday and J18s Sunday and the format for each day was the same, a 1,500m time trial followed by 2,000m six abreast side by side racing.

On Friday the only events available for the J15s were single scull, double scull and coxed quads.

Henley had three girls’ quads entered, a boys’ quad and two girls doubles. After the time trials all the crews had progressed to semi-finals bar the third girls’ quad of Allysha Stokes, Emily Simmonds, Sophia Spanswick, Pia Butcher and cox Sophia Jobbins who missed the cut for the semi-finals by half a second. This put them in the C final which they went on to win.

The other Henley girls’ quads finished first and second in the semis to make the A final, as did the double of Tabbie Hall and Freya Weiser, the boys’ quad T Szweda, P Giret, R Meredith, H Pusey-Arsyad, L Bolton and girls’ double of twins Sophie and Emma Eltze went to the B finals of their respective events where the girls finished third and the boys fifth.

The Hall and Weiser double set a new course record in the semi-final and in the final had clear water by 250m and won by 20 seconds against Globe Rowing Club.

The Lenthall crew had taken a seven second lead by 500m and cruised to a 24 second lead against Perkins by the finish who were being pushed by the other Henley boat who finished less than a length down on Perkins.

Single sculler Sam Pratt progressed from the time trial to the D final where he finished first. The girls’ coxed four of Amelia Sterjo, Karima Erbolat, Eyla Wild, Abbie Artherton and cox Caitlin Emery won the time trial and because of the number of entries in this event progressed straight to the A final where they had a tight race with Great Marlow School to the 1,000m mark where they were neck and neck but by 1,500m had pulled out a lengths lead and finished two lengths up to take gold. The quads of Sophie Graham, Hannah Boddy, Ailish Harkin and Lucy Jones and Ava Timms, Grace Pavey, Lauren Stokes and Yasmin Lakatos finished second and third behind Kingston Grammar School in the time trial which put them both in the same semi-final where they finish first and second. In the final the Kingston boat took an early lead which it built on throughout the race to win ahead of the Sophie Graham boat who took silver, the bronze going to the Henley’s Ava Timms boat though not until they had fought back from fifth place passing Northwich and then Nottingham & Union to get through the field.

In the J18 single sculls, Cameron Seager qualified as the slowest sculler in the C final, but then produced an outstanding scull to clinch the win after pulling away in the final 500m from a group of other scullers, so achieving a ranking of 13th overall in a huge field of 49 scullers.

In the final the two crews finished second and fifth with Headington School taking first place just a few seconds ahead of the Henley boat and a Scottish Composite taking third.

In a field of 32 quads, the crew of Guy Hutchins, George Lauchlan, David Wallace and Finlay Ribbons finished third in the time trial, just behind Windsor Boys’ School and Leander, but ahead of Tideway Scullers, gold medallists at National Schools. They went on to finish second in their semi final behind Leander.

In the A final, Henley attacked the race whilst sculling with style and were with the front runners through the first 1,500m, producing a quick third 500m, but couldn't quite sustain their early pace finishing fifth.

Shiplake College’s Charlie Crisp was fourth fastest out of 49 competitors in the open J18 single sculls where he finished fourth in his semi-final, just missing out on a place in the A final, and then finished third in the B final.

Nicole Dunn topped the time trial results in the women’s J18 single sculls, consisting of 34 competitors. The Shiplake College sculler won her semi-final race by three seconds and proceeded to take gold in the final, 14 seconds ahead of second place.

Shiplake was the only school or club to enter two crews into the open J18 eights event, the first eight topping the time trial table and the second eight finishing third out of nine entries.

The first eight won their semi-final and the second eight came second, both crews progressing to the A final.

In the final the first eight took silver, close behind St Paul’s School with the second eight finishing fourth.

Mia Vickerman and Merry Oakes made up the women’s J18 double sculls for Shiplake and were fastest in the time trial by seven seconds, out of the 31 entries.

The Shiplake women’s J18 quad of Ellie Webb, Casey-Jane Green, Scarlett Maleham and Izzy Blake-Hurworth were top of the time trial table out of 19 crews and won their semi-final by nine seconds. They won gold in the A final, winning by three seconds.

This meant the Shiplake College girls took a clean sweep of the sculling events, winning the single sculls, double and the women’s quads.

David Currie, director of rowing at Shiplake College, said: “We had some fantastic results at the British Junior National Championships on Sunday, gaining three golds and a silver medal which showed the depth of talent we have within the boat club.

“The Shiplake team spirit was very evident at the regatta and inspired all the rowers to do their very best. Success really did breed this weekend and we will use this motivation going forward to Henley Royal Regatta in a few weeks’ time.”