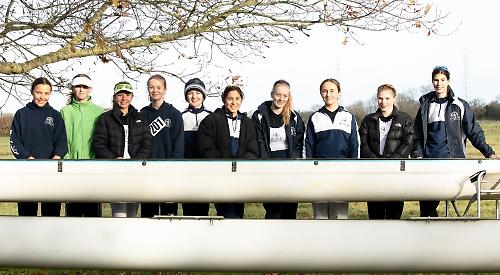 Hampton Head, a popular junior event attracted 640 crews and was raced across the two divisions on a 3,000m course downstream from Sunbury Lock to Hampton Wick.

Henley came away with two wins, a second place and they put in several other good performances in the competitive event.

Racing in WJ15 coxed quads against another 45 crews Holly Fuller, Nicolette Pagdin, Lilya Wild, Jess Mack and cox Josie Savin executed the race plan perfectly but were just pipped to the win by Surbiton High School who finished less than half a second ahead.

In WJ15 double sculls Pagdin and Wild had better fortunes and after some good steering from the girls to get round a number of slower crews they won by less than a second ahead of Peterborough City Rowing Club.

One of the best performances of the day came from the changed school/junior boys’ quad scull crew. The crew of Daniel Landau, David Wallace, Guy Hutchins and Ross Lamont won in a time of eight minutes, 32 seconds in a field of 21. Henley beat runners-up Windsor Boys’ School by 10 seconds with Sir William Borlase’s third. Meanwhile the Wycliffe Head attracted 268 competitors across its three divisions which were raced over a 2,500m course.

This slightly shorter head course allowed some of the Henley girls to compete in all three divisions. From the 12 events entered the Henley girls returned with 10 wins and four second-placed finishes.

Racing against five other crews in Division 1 the WJ14 crew of Jemima Butterworth, Lilian Graham, Chloe Hughes, Evelyn Meeks and cox Charlotte Tong triumphed in a time of 10 minutes, 39 seconds — seven seconds ahead of their teammates, Jemima Painter, Molly Hall, Amelie McDavid, Martha Dickson and cox Florence French. In Division 2 the crews were mixed around and raced up a year at WJ15 against eight other crews. The crew of Jemima Butterworth, Molly Hall, Chloe Hughes, Jemima Painter and cox Florence French, had a controlled and strong row to win in an even faster time of 10 minutes, 15 seconds. Their teammates of Charlotte Tong, Lilian Graham, Amelie McDavid, Martha Dickson and cox Evelyn Meeks were second in a time of 10 minutes, 45 seconds.

Schoenmakers then swapped to sculling and with Laoise O’Donohue won the double sculls, three seconds ahead of hosts Wycliffe.

This was a good turnaround for the double who with Pippa Jamieson and Lucy Jones had finished second to Wycliffe in the junior quads event.

In the women’s pairs Ailish Harkin and Lucy Jones took first place ahead of King’s Worcester with a second Henley crew in third place.