Pagdin and Wild lead the way for Henley junior girls 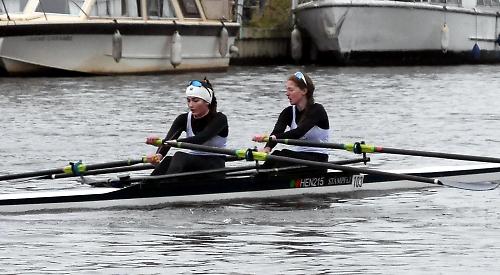 The event is raced over a course of approximately 3,000m downstream from D’Oyly Carte Island, Weybridge, to Miskins Wharf, just upstream of Walton Rowing Club.

The course starts with a straight 1,000m stretch down the Desborough cut before presenting the competitors, who for this event are all in coxless boats, with a 1,000m of S-bends and then a relatively straight last 1,000m.

Pagdin and Wild then competed in Division 3 in double sculls as did Jessica Mack with Holly Fuller.

The J15 girls’ events were heavily subscribed with 37 crews in the singles and 36 in the doubles.

In the singles Pagdin was the highest placed Henley girl finishing third having had difficulty in overtaking a slower sculler in front of her in the last 500 metres as she finished in a time of 12 minutes, 38 seconds.

Pagdin had better fortunes in the double scull with Wild where they took first place for the second time in two weeks finishing six seconds ahead of Walton Rowing Club.

The masters women competed in three double sculls, Margaret Hall and Julia Lock in a combined E/F event, Helen Turnell with Nikki Orr and Sarah Girling with Louisa Clarke in the D event. Turnell and Orr finished second in their event.