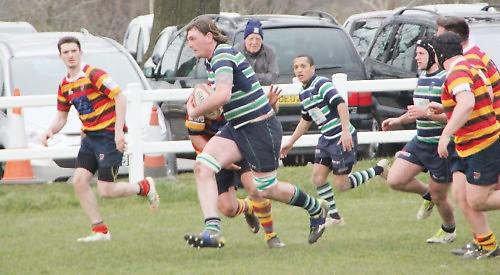 ABBEY failed to turn pressure into points as another winnable South West 1 East game slipped away. Despite the loss, Abbey remain ninth in the table.

The visitors had the greater territorial pressure but failed to find a way through Witney’s resolute defence.

From Abbey’s kick-off Witney hardly escaped their 22 for the first quarter-of-an-hour, but the visitors failed to find the fluid movement to capitalise on it.

The home side moved towards the half way line to win a penalty, which they kicked to the corner for a catch and drive. Abbey defended it well, but after several bites of the cherry, Witney moved the ball into the centre where fullback George Lewis ran through a sloppy tackle to touch down, with number 10 Harry Lewis taking the extra points.

Abbey struck back within a minute. From their own half winger Jules Greenaway made ground, linked well with his support and centre Ollie Walton went over for the try, too far out for a successful conversion.

The visitors had the better play, but the backs’ interpassing wasn’t up to their normal standard, so the reward came from Ollie Walton’s boot – two penalties to take the lead 11-7. Witney finished the half by camping on Abbey’s try line. Abbey defended stoutly keeping them at bay, but conceded a tad too many penalties to suffer the fate of conceding a penalty try, leaving a simple conversion in front of the posts. The turn round score was 14-11 to the home side.

In the second half two killer blows secured the game for the home side. The first was just four minutes after the restart. A penalty kick to touch provided the best try of the match.

The ball was won cleanly and was swiftly moved to the centre, where flanker James Merriman popped up, unmarked, to get the second touchdown, again the conversion was missed.

From the restart kick Dampies and Charlie Gingell combined well on the right, which Witney could defend only by conceding the penalty. It was Abbey’s turn to kick to touch for the catch and drive but it was lost and the opportunity was squandered.

It was an afternoon of penalty kicks to touch and line-outs as Witney’s fourth try came on the hour. Another catch and drive, then quick hands saw winger Alex Froggat go over for the score, again no extras.

Outside half Ben Mitchell found gaps for the visitors, flanker Tom Huggins burst through, Greenaway and Dampies again ran from deep, but all were pulled down short of the line. Jeremy Knights in the second row was putting in a hardworking shift, not just in set piece but driving possession forward and his partner in the second row, Sam Hallett, always strongly making ground and carrying forward, took a deserved try with 10 minutes left. In the sticky conditions the conversion went begging along with the losing bonus point.