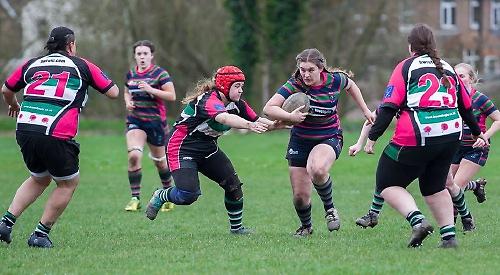 ABBEY NUNS 2nds ran out winners at High Wycombe to finish their second season of league rugby on a high note.

This was a fitting end to the season for the Nuns development team which has seen the club strengthen links between the University of Reading as well as provide an arena for women new to the game to learn and play rugby in a competitive environment. Only two weeks earlier Abbey Nuns hosted High Wycombe Belles at home in a tight contest with the Belles running out 20-26 winners. This time, however, tries from Ellie Brooks, Emma Sawyer and Rosie Binnie, a High Wycombe player who graciously boosted the Nuns' numbers, saw the score reversed as the development team recorded a good win to end their season on.

Pressure from the kick-off allowed scrum half Izzy Chaplin to orchestrate good phases of play between herself and fly half Karen Pacho, while the strong centre partnership of Sawyer and Emily Henderson tested the High Wycombe defence.

Eventually, after several scrums deep in the Belles' 22, it was the Nuns who crossed the whitewash first with Binnie carrying strongly over the line. Henderson slotted the conversion and the Nuns were on the front foot. High Wycombe responded well and their pacy centre Lisa Fitzpatrick almost had the next score had it not been for a last-gasp cover tackle by Annette Bevan, trying out openside flanker for the day and forcing a knock on.

The home side dominated the resulting scrum, however, and their scrum half Nieves Acero raced across the line to score. Undeterred, the Nuns made their way back up the pitch with strong carries from captain Meg Turnell and prop Katie Hobbs until second-row Brooks darted through a break in the defence and ran half of the pitch to score under the posts.

The second half saw the Nuns’ fitness levels tested as long passages of advantage played by the referee did not allow for many breaks. Olivia Mackenzie stole good ball in the line-out and Pacho and Bevan kicked over the top of the High Wycombe defence to gain territory. Eventually, good hands from fullback Frankie Taylor released Sawyer who showed immense strength to battle over the line for her side's third try.

Eager for their first win in a long time, the Nuns stepped up their defence in the final quarter, with huge tackles coming in from Turnell, Sofeea Walton and Maddi Bunn.

Although High Wycombe stole another try at the death, from the resulting kick-off the ball was won back by the Nuns and Pacho fired it off the sideline.