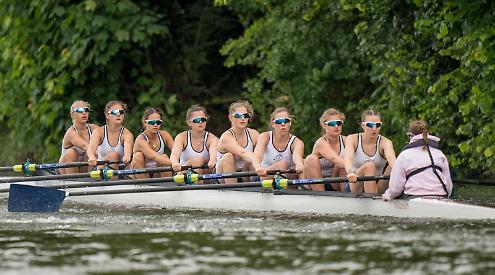 COURSE records were broken on one of the most exciting finals days in the history of Henley Women’s Regatta on Sunday, with new times being set or bettered in 23 of the 25 events.

Brown University of the USA became the first crew to go under four minutes 30 seconds on the 1,500m course on their way to winning the Ron Needs Trophy for championship eights.

The trophies were spread across a wide range of clubs from across the UK and the world with Henley Rowing Club, Leander and Shiplake College all securing silverware.

Henley won the Peabody Cup for junior eights and the West End ARA Trophy for J16 coxed fours from their nine crews entered.

In the top junior event, the Peabody Cup, the Henley crew of Natalie Schoenmakers, Lucy Jones, Nonnie Luke, Josie Sawbridge, Ailish Harkin, Pippa Jamieson, Blair Fitzgerald, Laoise O'Donohue and cox Rose. McEwen did well enough in the time trial to get a bye through the first round. In the quarter final they beat St George’s College by three lengths before beating St Edward’s School in the semi-final three-quarters of a length.

In a close final, Surbiton High School led by three-quarters of a length with 250m to go but Henley stormed back to win by a canvas.

Other Henley junior crews to make it through to finals day included the junior coxed four of Evie Tinegate, Amelia Sterjo, Abbie Artherton, Keira Delaney and cox Caitlin Emery who lost out to a Scottish composite in the quarter finals, the J16 quad of Tilly Macartney, Gwennie Hunter, Tabby Hall and Freya Weiser who lost out in the semi-finals to Wycliffe Junior RC and the other J16 quad of Florence. Lenthall, Daisy Janes, Emily Simmons, Sophie Eltze who lost to Glove RC.

All the Shiplake crews finished in the top four in their time trials meaning they progressed straight to the quarter-finals on Sunday.

The coxed four of Casey Green, Gesa Hallmann, Ellie Webb, Hannah Boddy and cox Monty Walker raced hard against Lady Eleanor Hollis but lost to them by a length in the quarter-final.

The double of Maya Jackson and Megan Hadfield beat George Herriot's School by three-quarters of a length in the quarter-final. They then lost to Sydney Rowing Club in the semi-final, who went on to win in the event.

In the sculling event the strength and depth in the Leander teams was evident in the double sculls final where the full Leander crew of Imogen Magner and Kathyrn Mole lost out to an U23 composite crew of Leander’s Katherine George and Vwaire Obukohwo (Twickenham).

In the final of the women’s quad Leander’s Xanthe Weatherhead, Rosa Thomson, Tash Harris-White and Jess Martin defeated Brown University by two-thirds of a length to secure the title.

Speaking after the event, Leander chief coach Ross Hunter said: “I am so proud of our women. These wins and results are the collective effort of our whole women’s team and coaching staff of Rob Morgan, Katherine Copeland and Richard Chambers.”

Upper Thames Rowing Club saw all five of their racing crews progressing through the time-trial qualification races in their respective events. However, despite these encouraging results none of the crews progressed through their side-by-side rounds.

After posting a strong time trial time just out of the top eight for seeding, Upper Thames club eight lost out to Vesta A, the eventual finalists, in the first round.

With only four seeded crews in the championship coxless pairs Upper Thames finished sixth in their time trial and lost by three-and-a-half lengths to the number three seeds from Imperial College who posted the fastest race time of the heats.

In a closely knit field of strong crews, Upper Thames’ Aspirational quad just missed out on seeding, finishing 10th in the time trial just six seconds behind first place. Despite sculling well they then lost out to eventual winners Edinburgh A.

Naomi Holland raced well in the time trail in the championship lightweight single sculls and drew a sculler from Oxford Academicals in their first round where she lost out by two-and-a-quarter lengths.

In the championship single sculls Megan Jackson drew the eventual winner from Bath University. Going off hard, Jackson led the early stages of the race before she was overtaken.

The prizes were presented by world and European medallist, Tokyo 2020 Olympian and 2022 Boat Race champion Imogen Grant, who told the winners how much the regatta means to her. She said: “Post-covid, it just feels like a massive celebration — a festival of women’s rowing.”

Henley Women’s Regatta chairman Naomi Riches said: “The three days of Henley Women’s Regatta have absolutely flown by and we have witnessed some incredible racing. The standard of rowing increases year on year and the huge number of course records this year shows just how the our amazing sport is progressing.

“One of the most exciting things to see this year was the entry of 57 development coxed fours, this really does look positive for the future of women’s rowing. It was a true privilege to watch all this unfold in my first year as chair.”