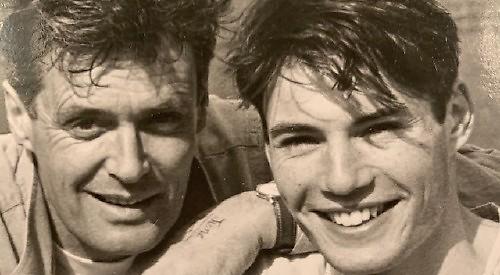 THE theatre runs through the veins of Simon Williams.

His parents Hugh Williams and Margaret Vyner were both actors and he ended up following in their footsteps.

He also married the actress Belinda Caroll with whom he had two children, Tam and Amy, who are both actors.

In a career that has spanned more than 50 years, Simon has performed on and written for the stage countless times.

So it’s no surprise, in the wake of the coronavirus pandemic and the devastating impact it has had on the entertainment industry, he’s doing what he can to support it.

Simon, 74, is appearing at The Mill at Sonning with Tam for two performances next Saturday (October 31) when they will talk about their careers.

Billed as a “kiss ‘n’ tell” between father and son, Just Williams will feature a wealth of memories, folklore, trade secrets, dirty linen and one or two cock-ups.

Simon, who lives near Nettlebed, is best-known for playing James Bellamy in the period drama Upstairs, Downstairs, Charles Merrick in medical drama Holby City and as Justin Elliott in BBC Radio 4 series The Archers.

He said: “We have both been scouring our memories and will be asking questions of the other.

“There will be little bits of history, some affectionate moments and nostalgia but there may be bits that are rather rascally and certainly some laughs.

“The audience will get to know about when things went wrong, the various cock-ups we have lived through and the craziness of working together.

“Tam will talk about what it was like in the school holidays when he came with me when I was working on location and also when I came to watch his school plays.”

Tam, who has appeared in the films Blithe Spirit (2019), Spectre (2015) and toured with theatre productions of Shakespeare, has never been far away from the stage.

“My boy comes from about six generations of theatre,” says Simon. “His great great, great grandfather on his mother’s side owned theatres.

“He was first on stage as a Lost Boy when he was carried on when his mother was playing Wendy in Peter Pan so he has been in the theatre world all his life.”

Simon says that growing up in an acting family is never straightforward.

He said: “My father was an actor and sometimes he would be home all day and then went to work at night and so for a long time I thought he worked as a burglar.

“He would come home and had the smell of the theatre about him. It was extraordinary. When I discovered this building, the theatre that he went to, I just loved to be there among the empty seats while my father got ready for the show, just like Tam was with me so it is in our blood.

“I remember being told that Tam was about to be born. I was recording the second episode of Upstairs, Downstairs and, once he was born, there were big celebrations on the set.” It wasn’t long until Simon and Tam worked together when they both appeared in the same episode of Dr Who in which he played Group Captain Gilmore.

Simon recalled: “There was an episode when we had a scene with a load of schoolchildren. It was a period piece so while it was filmed in the Eighties the scene was from the Sixties so they had to look the part.

“They were all paid a little bit of money for being in it but they had to have their hair cut to suit the era. Watching it you can just see Tam in the scene looking very cross because he didn’t like it.

“We have since worked together quite a bit but being in a family with an actor means quite a different childhood.”

Since the coronavirus gripped the industry, theatres had been forced to close for months and have only recently been able to re-open with fewer audience numbers and socially distanced performances.

Simon believes the theatre is more important now than ever to lift the spirits of the nation at what is a difficult time.

“I just think that the theatre is a safety valve,” he said. “It’s about people coming together after a day’s work watching life or a version of life unfolding. It’s so incredibly reassuring. They find themselves laughing at the same jokes, gasping at the same shocks or all jumping at the sound of a gun going off and you don’t get that watching television.

“When someone does the wrong line or a gun doesn’t go off as it should or when the vicar drops his trousers we all feel the giggles and the tears coming to our eyes.

“A town without a theatre is nowhere near as healthy as theatres help to bring people together.”

When Simon was approached by Sally Hughes, the managing and artistic director of The Mill, he had no hesitation in helping out.

In addition to Just Williams, he will be appearing alongside his second wife Lucy Fleming, the niece of James Bond creator Ian Fleming, for two performances of Posting Letters to the Moon on November 28.

This is a romantic, funny and touching portrait of life in the early Forties, featuring readings of wartime letters between the Oscar-nominated actress Celia Johnson and her writer husband Peter Fleming, the brother of Ian.

Simon is urging people to support The Mill. “It is a family business and Sally is so loved by everybody,” he said. “The entertainment is varied and I have performed there a lot over the past 30 years, lots of plays and a lot of stuff that I have written has been performed there.

“Just sit with your mask on, at a two-metre distance, with your hands sanitised in a spectacular cabaret-style experience and watch a story unfold.”

Track and Trace details will be taken on arrival in the foyer. There is no bar service. For the restaurant, customers will be given a time to arrive. On arrival your temperature will be taken. If it registers over 38 degrees, you will not be allowed to proceed into the restaurant or bar. For more information, visit www.millatsonning.com