My Grand (and green) Design 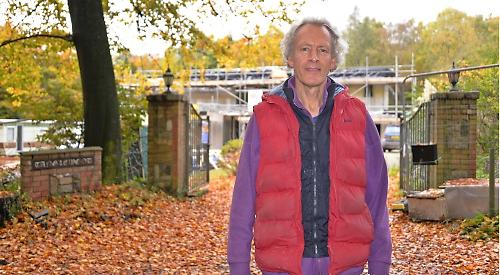 A HOMEOWNER who is replacing his country bungalow with a high-tech house is to be featured on TV’s Grand Designs.

Tony Searby, 60, says he will protect the environment while offering the healthiest possible living standards.

He has demolished his childhood home at Tanglewood, off Busgrove Lane in Stoke Row, and started building a two-storey dwelling of the same name after being granted planning permission.

The new timber-clad property will be in a horseshoe shape with a flat roof and solar panels. It could take another 18 months to finish as Mr Searby is doing much of the work himself.

He and his wife Ara will live there when it is finished and are living in a mobile home until then.

Grand Designs presenter Kevin McCloud has regularly visited the woodland plot since construction began in July as the project will eventually be featured on the Channel 4 show.

As well as six en-suite bedrooms, the house will have a “media room” and a garage on the ground floor plus a large living area with a larger balcony, a kitchen and gallery upstairs.

The inside of the “horseshoe” will have a courtyard which will be planted up and could include a Japanese-style “zen” garden.

Mr Searby designed the house according to “biophilic” principles in which architecture is integrated with a building’s natural surroundings, which is said to improve the occupants’ wellbeing.

The exterior will consist of sweeping curves of horizontal wood panels, which Mr Searby says reflect the natural shapes of woodland, while the garden will be extensively landscaped, creating habitats for wildlife.

The solar panels will connect to large batteries providing up to nine months’ worth of power annually and all the electrical appliances will have at least an A+ efficiency rating.

The house will use LED lights which will continually change colour to reflect how daylight shifts across the day.

The lighting will be “cooler” with bluer tones in the morning, which helps the body to produce hormones encouraging wakefulness, and “warmer” tones with more orange hues in the evening, helping to encourage sleep.

The system will be installed by a company which designed the lighting at Apple’s head offices in America.

Rainwater will be harvested by a rooftop drainage system to be used for laundry and the toilets while all the washing appliances will have water-saving features.

The building will be insulated to four times the level required by law, minimising the need for heating, and will use a mechanical ventilation heat recovery system, which sucks in cold air from outside and heats it up using warmer air as it exits the house.

The property will be triple- glazed with mostly south-facing windows and even the foundations will also be insulated.

It will have sensors to monitor carbon dioxide levels and let more air in if they get too high. This will prevent build-ups which can affect a person’s mood and concentration.

Mr Searby said: “It’s based on ‘circles within circles’ — the house surrounds the courtyard and is itself surrounded by gardens, which in turn are surrounded by the woodland. From within the property, you’re seeing nature whichever window you look out of.

“Healthy living principles aren’t such a ‘big thing’ as sustainable architecture so they need early adopters to encourage their spread. It’s widely accepted that time spent in nature has a restorative effect.

“The lighting is very important as the eye has receptors specifically for reacting to different wavelengths. We evolved to live outdoors and our circadian rhythms are tuned into that, yet most of us spend 95 per cent of our time indoors.

“The solar panels are also crucial because we need to stop burning fossil fuels and find intelligent ways to generate renewable energy. They can be used to charge electric cars, which are also taking off.

“It will take time before conventional housebuilding embraces these ideas because building companies work to regulations with a commercial mindset.

“It amazes me when I see expensive properties for sale which are rated poorly for things like thermal efficiency. I consider that substandard — we should be building new to a higher quality or incorporating those principles into renovation.”

The original bungalow was built in the early Sixties by Mr Searby’s parents John and Betty.

Mr Searby snr, who was 96 when he died in 2012, ran Vanallous business park in Busgrove Lane. He was a member of Henley Rotary Club for many years and was a keen cricketer who played for Stoke Row and Wallingford. His wife, who died in 2016, aged 92, ran a healing group with the late Wendy Martel, from Sonning Common.

Their son grew up in the village and attended Stoke Row Primary School, Langtree School in Woodcote and Leighton Park School in Reading before sitting a physical education degree at Loughborough University. He was also a keen cricketer.

He has had a lifelong interest in health and has worked as a fitness trainer and more recently as a lifestyle consultant to businesses wishing to improve employees’ wellbeing.

He has worked all over Britain but moved back to Stoke Row to care for his parents.

After his mother died, he considered building an “eco-community” on the site of the bungalow comprising 16 dwellings offering only the minimum living space required by law.

However, he abandoned the idea when planning officers said it would never be allowed.

In 2017, he applied to demolish the bungalow and build three five-bedroom detached houses which he would sell to fund an “eco-community” elsewhere.

The council refused, saying this would expand the village into the countryside, and the decision was upheld on appeal.

Then last year he decided to pursue his “green” initiative as he felt it would give him “a sense of pride, achievement and integrity”.

Mr Searby said: “I felt it would be sacrilege to spoil the site by dividing it and it needed a house in the centre to fit the tree line.”

The blueprints were drawn up by architect Nigel Hefferman, from Stonor.

Mr Searby’s neighbours were divided about the plans with four agreeing the bungalow was dated and needed replacing and three objecting, saying the unconventional design clashed with its woodland surroundings.

Planning officers said the development would be “highly sustainable and innovative” and enhance views of the Chilterns Area of Outstanding Natural Beauty.

He plans to work with charities to host respite breaks for people with a physical or mental illness.

Mr Searby said: “I was disappointed when the first applications were rejected but now I’m incredibly grateful. If they’d been allowed, I would have gone ahead with something I didn’t really want. The more drawn-out process gave me time to consider my priorities.

“Social inequality is one of the biggest causes of ill-health in our society — the greater the divide between rich and poor, the greater the detrimental consequences to health and wellbeing for everyone.

“If our house were to become exclusive, enhancing the wellbeing of the well-off and doing nothing for those who could benefit from it most but afford it least, it would add to those problems rather than solving them.

“For this reason, one of the most important challenges we face is to create a house of inclusivity. We need to create a way of funding those who can least afford it by collaborating with charities, sponsors and other organisations who share this vision.”

He said he had enjoyed working with McCloud, a designer who has presented the show since its inception 20 years ago. Mr Searby said: “Kevin has been absolutely delightful as he’s pretty much exactly like the person you see on the television.

“He is friendly, supportive, humble and both interested and interesting.

“He doesn’t give much feedback on the project as it’s more his role to observe what’s going on and present it to the viewer.

“He isn’t here every time they film but I imagine he’ll be shown highlights from whenever the camera crews visit.

“We wouldn’t normally shout about something like this as we’re pretty reserved but the story of this house is important and deserves to be told.

“However, I’m not a good publicist and thought Grand Designs was better placed than anyone to share it.

“I’ll probably be nervous before it’s shown as they’ll have hundreds of hours of footage and I have no idea how it will be presented.”

Mr Searby’s current priority is making the building watertight. Until this is done, he must catch rainwater in buckets or mop it up.

He said: “I don’t have the capital to contract everything out so I’ll have to do quite a bit of work myself. It’s anyone’s guess how long it will take, though I’m aiming for 18 months.

“We have no plans whatsoever to sell the house — it will be our ‘forever’ home so it’s very motivating every time we see any kind of progress.

“We thought it would be quite emotional to demolish my parents’ old home but it wasn’t because we had such a clear vision of what we were moving towards.

“It’s difficult to communicate or explain but it’s like we’re listening to what the house is asking us to do.”