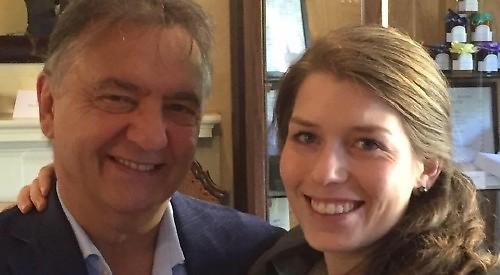 A FRENCH couple have opened a wholesale bakehouse in Stoke Row.

Jules Chambs and Pauline Philippe met five years ago when they were both working at Raymond Blanc’s Le Manoir Aux Quat’ Saisons restaurant and hotel.

They moved to Stoke Row last year and took over a vacant unit at the Van Alloys industrial estate so they could pursue their dream of opening a bakehouse.

They spent months equipping the unit before finally producing their first bread last month under the name Wild Frog.

Mr Chambs, 29, said: “We couldn’t find the help for adapting the unit to our needs, so we ended up doing a lot of the work ourselves. I had to do the electrics and plumbing on my own.

“At first I didn’t anticipate how long it would take to have all the machinery up and running. It took six months to source all the dough mixers and ovens.

“Nowhere was supplying industrial ovens. There are only two places in the UK and both were no longer producing them due to the lockdown.

“We have an ex-Sainsbury’s supermarket oven that we sourced from a man in Gloucestershire who refurbished it. It works perfectly. I can bake 60 loaves of bread in around 35 minutes.” Mr Chambs, who trained as a pastry chef, does the baking while Ms Philippe continues to work for Blanc as assistant manager at his Jolly Brasserie in Gerrards Cross.

He spends Mondays and Tuesdays mixing and proving the dough and baking on Wednesday and Thursday mornings. The loaves are prepped and transported to their customers from Thursday afternoon to Sunday, including the Henley Larder in Bell Street, Henley.

Miss Philippe, 29, said: “Jules is very creative and loves the science of food and cooking. I have learnt that even the way the flour is milled can make a big difference to the end result. When establishing our ingredient suppliers, we had to decide whether to go with French flour or British.

“The type of flour we are used to in France is not the same as over here but to import it would be tricky with Brexit. Ultimately, we decided we wanted to focus on using UK suppliers and for everything to be as local and organic as possible.”

The dough mixtures are left to ferment for more than 24 hours.

Mr Chambs said: “Each baker has a name for their sourdough starter, which is the cultivation of the yeast that gives sourdough the unique flavour.

“My previous starter was called ‘Stan’ but I am still thinking of a name for my current starter. I enjoy cooking in my spare time, especially for a large group or a party. One of my favourite dishes to cook is beef bourguignon, which originates from Burgundy where I come from.”

Mr Chambs was trained at Le Manoir, where he continued to work until last month.

Ms Philippe worked in the hotel as a guest relations manager and then managed the reception team at Cliveden House before moving to the Jolly Farmer.

She said: “Raymond Blanc’s company is the best. My job as a manager has been so rewarding and I’ve been working within the company for such a long time.

“I studied hospitality management at Vatel, the International Hospitality Management School, and then moved to the UK.

“I met Jules five years ago and we talked about combining our skills to launch our very own bakery, which has been a dream of mine since I was small.”

The name of their business is a nod to their nationality and the “wild” bacteria in sourdough.

Mr Chambs said: “I trained at Le Manoir. I had never worked in a kitchen in France. I studied cookery at the college in Poligny for around four years.

“The team at Le Manoir like to teach people from scratch so even though I had not worked in a kitchen before, they were more than happy to take me on. Most of the job is learning as you go.”

Mr Chambs and Miss Philippe hope to open their own bread shop in Henley.