Oscar winner takes us through a glass, Darcy 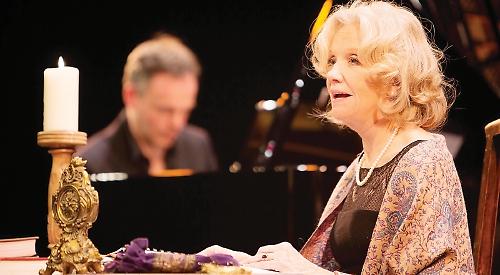 SHE was one of the biggest film stars of the Sixties, winning an Oscar and a Bafta nomination, and has continued to shine as an actor ever since.

But next weekend Hayley Mills will be treading the boards of the Kenton Theatre as part of a unique words-and-music adaptation of Jane Austen’s Pride and Prejudice.

Now 71, the daughter of screen legend Sir John Mills and the novelist Mary Hayley Bell is taking the part of the narrator in the production, which is playing at the New Street venue at 7.30pm on Saturday, September 16.

Adapted for the stage by the novelist Gill Hornby, who has previously appeared at the Henley Literary Festival, this version of Pride and Prejudice features the music composed by Carl Davis for the landmark 1995 BBC television series starring Colin Firth and Jennifer Ehle.

Interweaving with the spoken narrative, this will be performed by the pianist Ashley Wass and the violinist Matthew Trusler, who Mills is clearly delighted to be working alongside.

“It’s a real privilege to be performing on stage with them,” she says. “We’ve done it about six times now, in all sorts of lovely and very different places.

“Because of it being Jane Austen’s bicentenary there’s been a lot of interest from festivals. So we’ve done festivals and we’ve been in churches and town halls.”

While Mills is playing a narrator rather than Jane Austen herself, the format is inspired by the author’s home life.

“It’s similar to a situation that Jane Austen organised, because when she wrote her novels she would read them to her close friends and family, so there is that sense of intimacy about the reading — and of course about the book.

“The book was a very personal one — you are very closely connected and involved with the characters, especially Elizabeth Bennet, and I would think that it draws people in very much to the story.

“Added to and tremendously enhanced by the music, because the music is very beautiful and appropriate and of its time — of her time.

“I think the marriage between the text and the music is so cleverly realised by Gill and Carl that it’s just up to us, the performers, to get it right. Because, you know, it’s a long, dense book and Gill has selected those moments when their character and their humour show through.

“It’s enough text but it’s not overburdened with text — and the music also tells a story. It really takes the audience and their imaginations on this journey in a wonderful way.

“I will say a few words and then the music expresses it in that other way — music being a universal emotional language.

“So it’s hugely satisfying for me as the narrator and as a performer and tremendously enjoyable, I believe, for Matthew and Ashley — they love it.”

While not a musician herself, Mills says the overlap between the words and the music requires her to work especially closely with the pianist, Ashley Wass — much in the manner of a concert singer and an accompanist.

“There’s a real symbiosis going on between us,” she says. “He picks me off subtly because my knowledge of music is limited in terms of reading scores. There’s quite a bit of it that’s underscored [by the music] and it does carve in, so we have to work very sensitively and closely together.”

While many British children now study Jane Austen at school, or are introduced to her work via films and TV series, Mills says she came to the author relatively late in life.

“It’s only really in the last I’d say 10 years that I’ve started reading female authors like George Eliot and Jane Austen. And what a wonderful, exciting discovery they have been.

“I’m not sorry I didn’t study them in school because I think my appreciation and enjoyment is all the greater because I’ve studied them for myself later in life.”

If the activity of reading has clearly been central to Mills’s work as an actress, she stresses that it has also been a lasting source of pleasure.

“Reading is a very important part of my life. It always has been because I realised early on that I had a very unconventional upbringing — and particularly unconventional as far as my education was concerned.

“It was up to me whether I was going to know anything about anything at all because, you know, I kind of slipped between the floorboards, really, as far as education went. And so reading has been my kind of self-education.

“I’ve read things because I thought I should and that didn’t mean so much to me. But the things I’ve discovered that I really read and enjoyed, what a pleasure!

“And how much one resents having to go and cook dinner or do anything else when one has found a really wonderful book!” she laughs. “So, yes, it’s a privilege to do this.”

Given her family background, Mills’s literary bent should not really come as any kind of surprise.

“My mother was a writer and so she was always more interested in that side of things.

“She had been an actress but then she gave that up when she married my dad because she didn’t want to be separated from him. She realised very quickly and very cleverly, I think, that she wanted this marriage to last.

“He was a very successful actor by the time they married and she didn’t want to be going off to Timbuktu when he was going somewhere else, you know, and never seeing each other.

“It’s terribly difficult for actors, it really is. They get lonely and they’re young and they need comfort and companionship and all those things. People fall in love all over the place and it’s very difficult. Marriages and children suffer.

“So she realised ‘No, I want this marriage to work.’ And so she was able to pack up her typewriter and wherever he went she went too.”

Mills, who was previously married to the film director Roy Boulting, has been with her partner, the actor and writer Firdous Bamji, for 20 years.

She said that with this production of Pride and Prejudice touring without a director, she had benefited from a bit of off-stage input at previous venues, adding: “Matthew and Ashley are very experienced and my partner has been tremendously helpful a couple of times, to give us feedback. I mean, you do need somebody out there, don’t you, to say stand up or sit down or, you know, focus over there or whatever it is.”

With the last performance having been staged at Grimsthorpe Castle in Lincolnshire, Mills is intrigued to learn that the Kenton, which was founded in November 1805, dates from Jane Austen’s lifetime.

Asked if she has any preference between performing on stage or in front of a camera, she is candid about her motivations as an artist.

And, you know, you get that from the theatre — you get that tremendous sense of communication with an audience, which is absolutely wonderful.

“But, you know, when you make films or you do television you’re communicating more remotely but in a way more — there’s a camera that’s always on your face. So you know that whatever’s going on in your face they’re going to get. So there is that, which is wonderful.

“And, you know, right from the very beginning as a child I always felt the camera was a friendly presence — I liked it.”

She laughs. “I dont know what that says about me as a personality but I liked the fact that it was picking up what I was doing. It didn’t ever make me self-conscious or scare me or anything like that.

“I think that had a lot to do with the fact that I was very fortunate to work with wonderful, intelligent, very, very supportive directors when I first started.

“There was a sense of a person behind the camera who was right there for you, who really liked what you were doing, who was non-judgmental. And if they wanted you to do something different they always found a way of putting it so it didn’t shake your confidence, you know?

“So I had this very positive energy behind the camera. I enjoyed that.

“I just like doing things that are really good, that’s all.”

• Tickets for Pride and Prejudice are £25, including a £1 theatre restoration levy. The show runs for 90 minutes, including an interval To book, call (01491) 575698 or visit www.kentontheatre.co.uk