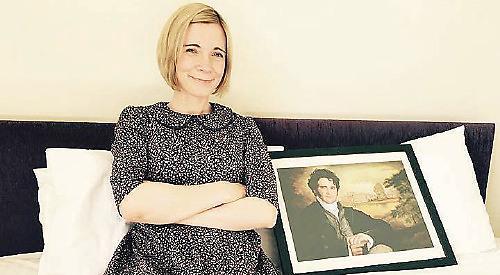 SHE’S the Reading-born TV historian who once turned the tables on an interviewer who asked her what she most disliked about her appearance by quipping “I am particularly proud of my lovely little ears.”

But as her army of fans would attest, Lucy Worsley also has a rather nice smile — and no wonder.

“My Henley connection is that I used to go to the orthodontist in Henley!” she laughs.

On Wednesday (November 15) the 43-year-old will be back in Henley again — but not to visit the dentist.

Rather, at 7.30pm she will take to the stage at the Kenton Theatre in New Street to give a talk entitled “Jane Austen at Home” based on her book of the same name published earlier this year.

The 200th anniversary of the author’s death has been formally marked by her inclusion on the back of the new polymer £10 note.

For Worsley, who once named Austen as the first invitee to her dream dinner party — calling her “the greatest human who ever lived” — such recognition is the least her heroine deserves.

“I get quite passionate about Jane Austen!” she laughs again, adding that her biography of the author, which she started working on four years ago, was her “dream project”.

“I’ve always known her stories,” she says. “I couldn’t tell you when I first sat down and read one because it feels like I’ve always known them. And the iconic TV series with Colin Firth, that was a big part of my growing up.”

While she is best known as an author and TV presenter, Worsley’s “day job” — her words — sees her employed as the chief curator of Historic Royal Palaces, the independent charity that manages some of the UK’s unoccupied royal palaces, including the Tower of London and Hampton Court.

It’s a role and a field of expertise that seems to have informed how she chose to write about Austen.

“I noticed that this anniversary was coming up and I thought, hang on, what do I do now? I’ve studied homes and houses — and royal palaces. I’m very interested in how people’s homes can tell stories about them, and I thought, well, maybe I can apply this approach to Jane Austen. Which will be a double whammy for me because a) I love Jane Austen and b) I love the history of domestic interiors and how people moved and how they dress and what they did all day and how they kept themselves clean. That’s where I was coming from.”

Someone else with a connection to Henley was Jane Austen’s mother Cassandra, whose father Thomas Leigh was the rector of Harpsden, having also served as the rector of All Souls College, Oxford.

“She came from a family of brainboxes did Jane Austen’s mum. They’re all associated with the university. And before that they were aristocrats, so she had some really quite significantly rich people in the background of her family.”

Jane Austen’s father George met his future wife after securing a fellowship to St John’s College, Oxford. He subsequently entered the clergy, receiving the living for parish of Steventon in Hampshire from the wealthy husband of one of his cousins. George and Cassandra went on to have eight children, of which Jane was the seventh.

Money was tight — something that was to remain the case until the author’s death aged just 41.

“Now it’s wrong to say that she was on the streets or anything like that — she totally wasn’t,” says Worsley. “But she was from this level in society that’s called the pseudo-gentry. I think it’s quite a useful word because if you’re in the pseudo-gentry it means you want to be like the landed gentry but you haven’t actually got any land. There’s a certain amount of make do and mend and keeping up appearances involved.

Fans of the books and the many resulting films and TV series might be surprised to learn that their favourite author was regularly pressed into service to provide childcare.

“Exactly!” chuckles Worsley. “What do you do with your unmarried daughter or your spinster aunt? Well, you sort of make them work for you. They’ve got to earn their keep. You’re buying food for this woman, after all. What work has she got to do — apart from look after my children, write my letters, point my embroidery, bind my wool, pay my social calls to the boring neighbours, give out charity to local villagers — the list goes on and on. There’s loads of things these women had to do, even though to the naked eye it looked like they were leisured.

“People like the Austens would have had servants living in their houses, just because everybody did, because domestic labour was really cheap, so you either were a servant or you employed servants.

“But also the Austens had to secretly do things like mend their own clothes, help out in the kitchens, dig the vegetables. Which, you know, they had to pretend to their posher neighbours that they weren’t doing because that wan’t genteel. But we know that Jane was pretty hands-on.

“She didn’t particularly like it. She wasn’t particularly good at it. At one point she says ‘Composition seems to me impossible when my head is full of joints of mutton and doses of rhubarb’ — which is a constipation cure. So here she was having to think about the mutton and the rhubarb when actually she would prefer to have been writing her six world-changing novels.”

“Well, in one sense her novels did that because they began to say, look, isn’t it rubbish that these heroines that Jane Austen creates are put into the position where they feel they have to marry for money? I think that was the subtext of what her books were about. And that is really actually kind of in a sneaky way revolutionary.

“But I think, taking a step back from that, her own decision not to get married, not to have 10 children, which is the number of children that the man who she broke off her engagement with actually went on to have, not to live a comfortable life with money in a big house.

“All of those things which she had to do before she even got to writing the books were really quite risky, brave, bold and novel things for her to have done.

“She had offers of marriage. She just turned them down, though. She thought ‘No, I don’t want to go that way — I prefer independence.’

“I get the idea that what she was searching for throughout her life was a place where she could just live quietly and get on with her writing. And eventually she ended up in this cottage with her mum and her sister. And a lot of people would say, ‘Oh, that’s a terrible life, that must be really boring.’ But actually that’s where she was happiest, once she found this little place that they could call their own and sort of settle down and get on with it.”

Given the tough life she had, was she happy with her lot or was it a struggle?

Eventually, the publication of Austen’s novels began to win her celebrity fans, including George, Prince of Wales — later George IV — who is best known to modern audiences as Hugh Laurie’s character in Blackadder the Third.

At his invitation, Austen dedicated her fourth novel, Emma, to him. So is it fair to say she achieved a decent measure of success in her lifetime?

“Towards the end. It was just beginning to grow. But, you know, while she was alive two of her books weren’t even published and her name was not on the cover of any of them because it was unladylike.

“So it’s sort of devastating and galling that she died just before it all took off for her and she became an absolute household name. She had some recognition but she never saw what she deserved. I still have a real sense of injustice about that — it still annoys me.”

The scale of Jane Austen’s posthumous success is difficult to compute. Like Shakespeare and Dickens she is a fixture of the
A-level English syllabus but the film adaptations of her works tend to do better at the box office.

For Worsley, this is unsurprising.

“Dickens can’t write women at all. That’s his biggest flaw. Whereas Jane Austen is all about writing women. But what she does is create dialogue, fantastically, and that’s often pointed out to me — it’s one of the reasons her books work so well as feature films. So I’m sure today Jane Austen would have been writing for television — something very snappy, something very polished, something very sparkling and all about the sort of epigrams and the interchange of words between characters and short scenes — short scenes moving very quickly. And always people in the scenes — not massive, long descriptive passages. It’s all about the plot. She was a bit of a screenwriter. She is a screenwriter!”

It is well documented that from an early age Austen would read drafts of her stories to her family in the evenings, gaining valuable feedback in the process.

“Yes, like a stand-up hones their act over lots of deliveries, I guess. And this is partly to do with the economics of lighting.

“Because if you’re at the Austens’ level of society it was dark, country evening, family all in the room, you don’t want to be using lots of candles — you can’t afford to do that. So you light one candle or two candles, and one person gets the book and reads out loud to entertain everybody else, you see?

“So it’s not like everybody can read seven separate books — there has to be a performance by one person of the one book by the light of the one candle.

“A good measure [of her success as a writer] is the way that people even today can so sincerely disagree about what [her work] means. There are so many layers to it — in the way that Shakespeare stands up to many, many, many different readings, so does Jane Austen. And that’s why she’s fresh and current and that’s why people are still talking about her.”