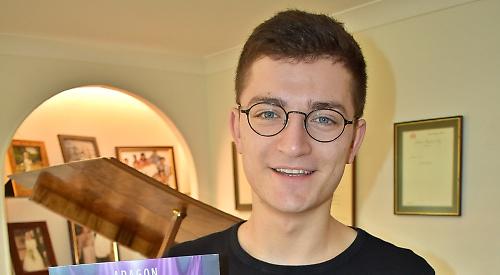 AN actor and musician from Henley has co-written a musical about Henry VIII’s six wives which is being staged in the West End.

Toby Marlow helped pen SiX with friend Lucy Moss whom he met at Cambridge University and where they spent much of their time neglecting their degrees to make theatre.

A year ago they entered the studio to write together and there they transformed the former queens of England into pop princesses.

The plot puts Catherine of Aragon, Anne Boleyn, Jane Seymour, Anne of Cleves, Catherine Howard and Catherine Parr together as a singing group in a bid to reclaim their pigeonholed historical reputations.

The result is a light-hearted debate about who was the most hard done by and the one who suffered most at Henry’s hands is appointed group leader at the end of the 70-minute performance.

Toby, 23, said: “It is a parallel universe where they have formed a girl group, it’s not like they have come back from the dead, they are just all alive at the same time.

“They get to put across their side of the story without Henry being there so it can help settle the debate of who his favourite wife or queen was. It’s like a competition for the audience to decide who, out of the six, had a worse time.

“It is not a narrative musical, it is not fact, fact, fact all the way through but we do go into the history, with each wife’s big event or passage in time.”

The performance is set at a pop concert which is part of the #DivorceBeheadedLive tour.

“It is like going to see Little Mix or Beyoncé,” Toby says. “It’s a chat and a song with dancing. We are making these characters the stars. They are on stage for almost the entire time. If it’s not their solo they are doing the backing singing and dancing.”

All the historical aspects of the characters remain but have been reinterpreted in a modern way so it’s relatable to today’s audiences.

Toby explains: “For example, Anne Boleyn has often been described as conniving and manipulative who is scheming to have power but we thought it would be funny to have this young woman who is a bit bored and doing things on her phone.

“She’s a bit of a millennial and that’s why her song is called Don’t Lose Ur Head — as in, get over it! For each of the wives there is a slight surprise.”

He added: “Some people have come away from it saying that while it is fun they have also learnt something, which is great.”

SiX started life with the Cambridge University Musical Theatre Society at the Edinburgh Festival Fringe 2017, where it was nominated for the inaugural Musical Theatre Review Best Musical Award.

It attracted the attention of producers Kenny Wax and Global Musicals, who are presenting this all-new production at the Arts Theatre in London, where its four-night run began on December 18 and will continue on return on January 8, 15 and 22.

An extra performance has been added on the penultimate night, starting at 10pm, as all the other performances are sold out.

Toby, who achieved a 2:1 in English, sent his idea for the musical to the theatre society when it opened up applications for a show to take to the Fringe.

But at that time all he knew was he wanted to create a show based on “something famous” and have pop music in it, which he enjoys writing, and have mostly female characters.

“In the world of musical theatre there are few good and interesting roles for women and their songs are sad love songs,” Marlow says. “I thought it would be really good to showcase six wonderful performers, with six equal parts and sassy songs.

“Then, when I was doing some poetry work I had this idea of a girl group at a pop concert and came up with Henry VIII and his wives. I did a bit of research and thought they were so interesting with fascinating lives, aside from Henry.

“The other idea I had was a reality TV show featuring Shakespeare’s heroines. It is helpful to have subject matter which people have an idea about already so then they would think about coming to see it.”

Toby then rang Lucy, who predominantly worked as a director, to get her on board.

“I couldn’t write songs retelling the lives of six women from a male perspective,” he said. “In the last 30 to 40 years each wife has been written about predominantly by men and is always in relation to their mutual husband so SiX is a fresh perspective on these women’s lives and from a women’s point of view. Lucy was brilliant at coming up with a new lens to look at each character.

“She would confront me on every lyric and would push it to be better, more sensible and logical as I have a habit of churning out commercial pop songs. What we wanted to do is use pop music as a means of storytelling.”

There is a big opening number where they all sing Ex Wives and in the middle they become fashionistas at Haus of Holbein and, new for the January shows, a medley has been added which is “full of surprises”.

With the music old and new have been put together so synthesisers have been used alongside harpsichord and lute sounds accompanied with modern lyrics but combining the formal historical references.

The duo have looked to combine “Tudorness” and 2017/18 by using costumes with Tudor patterns and accessories but with modern shapes.

Toby says he has been surprised by how successful the show has been. He said: “When we took SiX to the Fringe we had no expectations of anything. We thought that someone might come along and give us some advice but the success just spiralled.

“My mother has always been my harshest critic and she likes it and it is overwhelming to see so many people going to see it. I really don’t know who is buying these tickets.”

Toby, now lives in London but his family home is in Binfield Heath. His parents are property developers Andrew and Helma and he has a sister Annabel, 19, and brother Jasper, 25.

Following the success of SiX Toby says he has been approached with offers of “new things” and is pursuing new writing and performing projects.

He says would be happy to do more writing with Lucy while the duo are also two-thirds of the award-winning theatre company Hot Gay Time Machine, whose show of the same name had a sold out run at The Other Palace in November.

Toby adds: “I also like writing standalone songs for singers but at the moment I am just keeping my options open.” Ever since he was a small boy Toby loved performing. His first lead part was The Grumpy Sheep in a Christmas play at Rupert House School in Henley.

By the age of nine he wanted to act professionally and joined the child acting agency, Abacus, for film work until he started his GCSEs at Abingdon School.

His films included Miss Marple, filmed locally, Ben Hur, filmed in Morocco, and Senseless, filmed in Glasgow and at school he was the MC in the musical Cabaret, Simon in Hay Fever and Candide in Voltaire’s Candide. He used the 45-minute bus journey to school to learn his lines.

Toby has also performed solo and alongside his family at the Henley Living Advent Calendar. This year he appeared on night 21 on the roof of the Hart Surgery. He played keyboard and sang songs, including some of his own.

• Tickets are still available for the 10pm performance of SiX on January 15 at the Arts Theatre, London, priced at £20. To book, visit www.artstheatrewestend.co.uk