Dad's Army vicar has time for tea at the Kenton 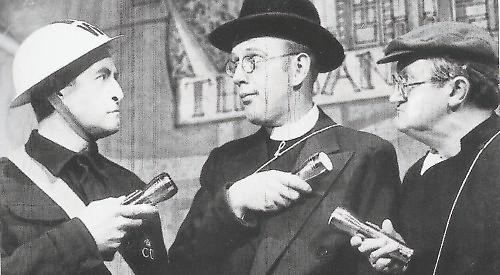 ACTOR Frank Williams has been working in television for six decades.

He has shared the screen with a vast array of comedic talent, including Tommy Cooper, Peter Sellers and Thora Hird.

But it will always be his role as the Rev Timothy Farthing in Dad’s Army for which he will be best remembered.

This year marks the 50th anniversary of the classic sitcom about the British Home Guard during the Second World War.

It ran for nine series between 1968 and 1977 and spawned a radio version, stage show and two feature films, the last of these in 2016.

Frank, who is now aged 86, says he loved playing the huffy vicar, who reluctantly shares his church hall and office with Captain Mainwaring’s platoon.

“Timothy Farthing was a terribly nice man,” he said. “In some ways he was a bit tetchy and irritable, as I suppose you would be with Mainwaring and his platoon about, interrupting when trying to write sermons, but his heart was in the right place.”

Frank will appear at the Kenton Theatre in Henley next month to talk about his life and career and will sign copies of his bestselling autobiography Vicar to Dad’s Army: The Frank Williams Story.

He will be interviewed at the New Street venue by author and entertainer Chris Gidney and the audience will be able to submit questions for him to answer after an interval.

Frank says: “We rake over my career but a great deal is concentrated on my time with Dad’s Army as that whole show was such a happy experience and I have always said that it is the happiest period of my career.

“We didn’t do just the TV series, we did the feature film in 1972 and I had a little part in the most recent feature film. We also did a radio show and a stage show, which was six months at the Shaftesbury Theatre in the West End, as well as a Royal Variety performance for the Queen and Prince Philip.

“In 1976 we did a six-month tour during that wonderful summer. I was good friends with Teddy Sinclair [the verger], Bill Pertwee [ARP Warden Hodges] and Ronnie Grainge, who was in the stage show but not the TV series, and we would go out for the day together.

“We took some cine film and that’s also going to be part of my show, seeing how the cast relaxed and what we got up to backstage. It was a wonderful cast to work with and we all had a great time.”

Frank was born in Edgware in July 1931. There was no television back then so it was going to the cinema that convinced him to become an actor. The first film he went to see was Captain January, starring Shirley Temple.

Somewhat appropriately, one of his memories of wartime involved the Home Guard. He recalls: “I was eight years old and I remember seeing a German fighter coming down and the pilot come down by parachute and my mother saying ‘Quick, get Mr Humphries!’ — who was the leader of the local Home Guard, and lived a couple of doors away from us.”

Frank’s first attempt at acting came in his school’s production of The Ghost Train and later, in Dad’s Army, he would act with Arnold Ridley who wrote it.

He television debut came in 1952 in The Call Up, a drama documentary about six young men starting their national service. Three years later he appeared in ITV’s first comedy, The Army Game, where he became a regular as Captain Pocket. It ran for four years and was transmitted live.

Frank then went on to appear in Dad’s Army, helped in part by knowing co-writer Jimmy Perry, who ran the Palace Theatre, Watford, with his wife. He made his debut in the first episode in series three, which was the first to be filmed in colour.

“It was always very well organised,” he recalls. “We would do the on-location filming two weeks before each series in Norfolk and do the studio stuff once a week for six or seven weeks, for however many episodes there were in a series, and then they would fit the two together.

“One of the things that has struck me was how little regard there was for health and safety in those days. I don’t think we would get away with half of the things nowadays that we did then. When we were on location, Bill Pertwee was forever falling into water. Wherever there was a river or something, you would be sure Bill would fall in it.”

Frank’s favourite moment came in The Royal Train, an episode of the sixth series in which he, the verger, warden and local mayor, dressed in full official regalia, are frantically pumping away on a push trolley down the railway line in pursuit of an out-of-control steam train.

“It was hard work,” he says. “And that’s another thing that health and safety would be upset about.”

After Dad’s Army had finished, Frank appeared in one episode of holiday camp comedy Hi-de-Hi!, again as a vicar, and You Rang, M’Lord? — which ran for four series from 1990 to 1993 — where he was “promoted” to bishop.

He also returned to the theatre and was offered the chance to appear in a production of a new play by William Douglas Home, The Editor Regrets. It was first presented at the Kenton where it ran for two and a half weeks before going on a short tour a few weeks later. Frank also did three plays with the English Theatre in Vienna, of which he says: “Audiences there didn’t know anything about Dad’s Army, which meant I could be more serious.”

Frank considers himself lucky to have worked in the “golden age” of British comedy, which lasted from the late Sixties to the early Eighties.

With the advent of DVDs and the internet, as well as repeats on television, these comedy shows are now reaching new audiences all the time and the fact they are still popular shows the quality of what was produced.

Frank says: “I think it was a golden age of comedy. Jimmy and David [Croft] were very clever. They wrote all their stuff set in the past so it never dates, just like It Ain’t Half Hot Mum and the Hi-de-Hi! holidays camps. I also think they got the casting so right — people love the characters.

“You now have grandparents who watched it, having watched it with their children, and now you are getting their grandchildren watching it.”

Frank, who is president of the Dad’s Army Appreciation Society, added: “I do like to watch the repeats of Dad’s Army on BBC2 and it is still amazing. There are occasions when I sit and watch an episode and say ‘I’m not in this one’ and then all of a sudden I turn up.”