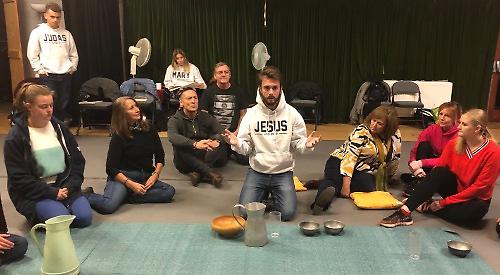 WHO was Jesus Christ? More than two thousand years since the man himself walked the earth, it’s a question that
continues to intrigue, divide and entertain us.

Was he the son of God or simply a hugely talented and charismatic prophet and teacher?

One answer — first suggested nearly half a century ago by Andrew Lloyd Webber and Tim Rice — is that he was a superstar.

Having made their names in the late Sixties with Joseph and the Amazing Technicolor Dreamcoat, the pair turned their attention from the Old Testament to the Gospels.

Jesus Christ Superstar started life as a 1970 rock opera concept album before being adapted into a stage musical that made its Broadway debut the following year.

Unusually, but also like its predecessor, the story is told entirely through song, with no spoken dialogue.

Loosely based on Matthew, Mark, Luke and John, the musical follows the last week of Jesus’s life, beginning with his and the disciples’ preparation for their arrival in Jerusalem and ending with the crucifixion.

Now it is coming to the Kenton Theatre for four days courtesy of the Henley Amateur Operatic and Dramatic Society.

The show, which runs from Wednesday (November 20) until Saturday, November 23, is being
co-directed by Julie Huntington and Samantha Riley, the vice-chair and chair of HAODS respectively.

According to Julie, the society last staged Jesus Christ Superstar at the Kenton back in 2004. “Many years ago, yes,” she laughs. “But they did it traditionally with the traditional robes and Roman uniforms. So it was more like a bibical play and this is more like a rock concert.”

With Samantha also taking responsibility for the choreography, the two co-directors have decided to give the musical the steampunk treatment.

“That’s why we’ve got a clock as the logo,” says Julie. “Clocks and cogs and wheels and pipes and steam. Because the concept of steampunk is Victorian technology crossed with what the Victorians thought the future would be.”

But with classic songs such as Gethsemane, Everything’s Alright and I Don’t Know How to Love Him to showcase, it’s the music that promises to be the real star of Jesus Christ Superstar.

“As far as I’m concerned, the music is another character in the show,” says Julie, who also came up with the production design. “There’s only five in the band, so they’re on stage and they’re very much part of the show. The drums are up on their own levels, the orchestra pit is covered over and we’ve got all this extra space to work with.”

As Julie explains, the Kenton has the capacity to take out the usual front row of seats to extend the stage by two and a half feet, which is being done for this production.

“The stage manager Jonathan Moses is an absolute genius,” she says. “He will look at my drawings and go, ‘Um, technically we can’t do that — but we can do this and we can do that.’ So he’ll work out the technical bit, but that’s the basis of the whole show.

“Because the music is such a feature of the show there are some amazing lead guitar breaks, so we’re going to feature the guitarist as very much a part of it.

“The musicians are professionally engaged and this is a group of people who have already done the production, so they know the music, and we’ve got an amazing lighting engineer who will give us lights that pulse to the beat. The music is important because it’s what people know — the show is like a big rock concert with a story going through it. There will be lots of different lighting effects, which will give it the creepiness we want. And with the music, everyone in the cast has got their own musical motif. Even God. He doesn’t actually speak or sing or anything, but it’s obviously his motif.”

What does Julie mean by creepiness in this context?

“When Judas is betraying Jesus at the end of that one scene there’s a really creepy background atmosphere to it — like, oh god, you shouldn’t be doing this. But then the priests and Caiaphas the high priest are like ‘Yeah, well done,’ you know? And that makes Judas feel even more guilty.”

Making full use of artistic licence, the show famously explores political and interpersonal struggles between Judas and Jesus that are not present in the Bible.

“It’s a bit like jealousy with Judas,” says Julie. “Because he and Jesus were tight, you know? Best buddies. And then along comes this bird Mary and interferes. Mary Magdalene, the love interest.

“Judas gets his nose put out of joint and there’s an amazing scene where Mary’s saying to Jesus, ‘Ah, come on, you know, you’ll be all right.’ And Judas comes along and says, ‘What do you want to associate with a woman like her for?’ And Jesus defends Mary.”

Julie and Sam had always wanted to be in Jesus Christ Superstar, so they have both joined the cast of 20, playing priestly persecutors of Jesus.

“We were determined to be in it,” laughs Julie. “She’s the other baddie. So I watch her and she watches me to make sure we’re doing the right things. Very few times do the director and choreographer and musical director get to take a bow, so the production team are going to come out and have a bow as well.”

Evening performances start at 7.45pm and there is a 2.30pm matinée on the Saturday.

Tickets are £18 with concessions available and the show has a running time of two hours with a 20-minute interval.

For more information and to book, visit www.kentontheatre.co.uk

Another serving of classic TV comedy

WITH final rehearsals under way for Jesus Christ Superstar, HAODS has announced that its next production will be a stage version of Are You Being Served? by the TV show’s writers David Croft and Jeremy Lloyd. A spokesman said: “This well-loved sitcom is going to be given the HAODS treatment as the subject of our ever popular annual dinner theatre.” The venue for the show, which will run from February 19 to 22, is the HAODS Studio next door to the Kenton Theatre in New Street. Readings for the show will take place on November 27 and December 2, with auditions to follow on December 4, all starting at 7.45pm. Those looking to take part are asked to email Julie Huntington at hunting311@aol.com