Adaptation will become my memory of Brontë’s heroine 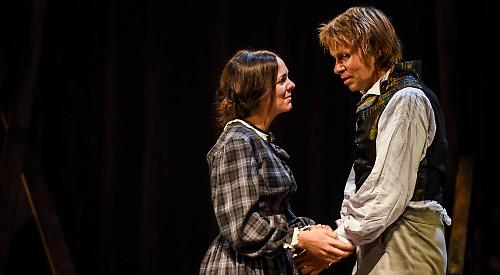 EVERYONE who has ever read the book has their own memory of Charlotte Bronte’s Jane Eyre in their head. It is a story that once revealed is never forgotten.

She is an iconic figure in literature — a woman not afraid to stick by her principles no matter the consequences in an age when a woman was not much more than a man’s chattel. She must honour and obey... but not Jane.

Although I read it many years ago, I remember the orphaned child, the unwelcoming guardian aunt, the mad wife in the attic and Jane’s sense of betrayal when she finds out that the love of her life is married, consequently fleeing in horror at the betrayal, the fire, and the blind Mr Rochester.

This production was a masterpiece of translation to the stage by Nick Lane for Blackeyed Theatre.

It was pure storytelling from beginning to end and had me gripped throughout, even though I knew what was coming.

I shared in Jane’s pain at the hands of her spoilt cousins, her fear of her loveless Aunt Reed, her joy at Mr Rochester’s proposal, the depths of her despair at finding out about his mad wife, and the flooding back of her love for the blind Mr Rochester on discovering the loss of Thornfield Hall, and Edward’s gallant attempt to save his wife, Bertha — blinding himself in the process. The actors never ceased to amaze us with their talent. All moved effortlessly between their multiple characters and at one point in the action Ben Warwick (Mr Rochester and Mr Brocklehurst) and Oliver Hamilton (St John Rivers, John Reed, Mr Mason) even overlapped in their underscoring on the piano — the left hand of Ben being joined by Oliver’s right as one took over from the other. Ben also added some plaintive violin playing to the mix.

Eleanor Toms showed startling versatility with her spiteful Georgiana Reed and her joyous Diana Rivers, along with her Blanche Ingram, Helen Burns and Adele Varens — there being no doubt as to who she was portraying.

Eleanor delighted us not only with her singing voice but also her moody cello playing. Camilla Simson gave us an elegant Mrs Fairfax, contrasting sharply with the mad Bertha Mason, the mean Aunt Reed and the happy-go-lucky Mary Rivers. But there was no doubting the power of the performance of this iconic character from literature that Kelsey Short gave us.

Her portrayal, tearing at our hearts with her heartfelt sincerity was unfaltering. She wrung us out with her performance, taking us with her throughout her painful journey through to the joyous conclusion. She was a joy to behold.

This production was a work of art in collaborative theatre. Every move was perfectly choreographed, with the cast moving seemingly odd pieces of wood, the odd bench or piece of fabric which would ingeniously then become a corridor, an attic or even a coach. The director, Adrian McDougall, must be congratulated along with all the rest of the team for quite a remarkable piece of work.

From now on, this will be my Jane Eyre memory and I shall certainly be seeking out more from Blackeyed Theatre in future. You must do the same. You will not be disappointed.