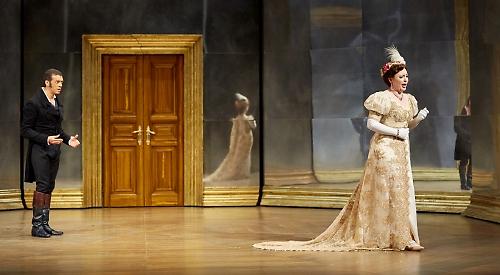 AFTER a year on the back burner, Garsington Opera is roaring back with the most expensive production in the festival’s history.

Richard Strauss’s comic opera Der Rosenkavalier opened at the Wormsley estate near Stokenchurch on Wednesday night — the first in a run of nine performances stretching until Saturday, July 3.

Because of the pandemic, the festival is currently operating at limited capacity, with two seats between each group of up to six audience members.

But with the Government preparing to make a decision about the final stage of lockdown easing on June 14, Garsington’s executive director Nicola Creed hopes a lot more people will potentially be able to enjoy the festival’s offerings from June 21 onwards.

“If the Government is to lift restrictions, we will consider really hard how we think our audiences are going to feel,” she says.

“Because we will have had 14 performances before the 21st, we will see how busy it feels here or whether we think we can lift restrictions straight away.

“But it’s definitely worth people keeping an eye on our website and for any announcements because as soon as we know, we would absolutely love to sell those tickets.

“If we are going to put them up for sale, there will be plenty to sell.”

The tickets in question would be on public sale, meaning that anyone can currently join the waiting list to buy them. As in previous years, the 2021 festival is running from the start of June until the end of July.

Along with Der Rosenkavalier, this year’s main productions are a revival of Tchaikovsky’s Eugene Onegin that runs until July 23, Handel’s Amadigi (June 19 to July 24), and Rossini’s Le Comte Ory (July 2 to 25).

The season will conclude with two “community operas” featuring singers from the surrounding area alongside professional soloists.

John Barber’s The Selfish Giant will be performed by Garsington’s youth company on July 29, with the adult company taking to the stage for Orlando Gough’s Weather the Storm on July 30.

Weathering the storm, of course, being what everyone at Garsington has been doing for the past 14 months. In March last year the festival’s entire season of operas had to be cancelled.

But then in September came a chink of light when, in the gap between the first and second national lockdowns, it proved possible to put on a semi-staged version of Beethoven’s Fidelio in honour of the 250th anniversary of the composer’s birth.

“It’s a sort of indoor-outdoor space, our opera house,” says Nicola. “It’s got great big sliding screens on the side, which generally we have closed to make sure that it’s all cosy. So it’s a totally enclosed opera house, to all intents and purposes, but we can slide things back and make it open-air.

“On that basis we went ahead last September with five performances but with a very reduced audience. Only 200 people each night, which was a third of our normal audience capacity.

“But it was absolutely amazing. We happened to have five glorious evenings, so everybody came and picnicked and we were thrilled to be here. It was an extraordinary sort of Indian summer.

“We did a small orchestra, with just 17 of the Philharmonia sitting on the stage, and the principal singers. We didn’t have a full chorus but we had some screens on the back of the stage which depicted things that were going on. It was the most amazing production.”

Nicola says the experience of putting on Fidelio was to prove an invaluable one for the festival organisers.

“We knew therefore kind of how to approach a socially distanced audience and how to look after them,” she says.

“Because all the gatherings beforehand and in the long interval happen outside, we feel we are in a very good position to offer a safe environment. And then we were obviously planning and hoping for something that we could go ahead with for this 2021 season.”

While most operas are told in two acts, the season opener Der Rosenkavalier — German for The Knight of the Rose or The Rose Bearer — runs to three.

“It’s a hugely exciting thing for us to be putting on,” says Nicola. “It’s Strauss’s biggest and most famous opera and it usually has an enormous orchestra of 70-plus.”

With social distancing measures applying to the performers as well as the audience, certain changes have had to be made to the staging.

“We’re doing a special edition of the orchestration to fit for 45 players,” says Nicola.

“It was first produced for performance in Munich earlier this year. We’re doing the second performance of it here, so we’re very excited about that and we’ve got an amazing cast.”

Nicola confesses that at one point she and her colleagues were worried about whether the production would be able to go ahead in light of covid restrictions.

“Would we have enough space to put the chorus on the stage and the orchestra in the pit. Could we accommodate everybody?” she says.

“I mean, it’s a very expensive opera, by far the most expensive we’ve ever put on, and we didn’t know whether we could manage that given the fact that we’ve got limited capacity on the seats.

“But thanks to our very generous sponsors of this particular production we have been able to go ahead and that for us is a huge achievement in this covid year.”