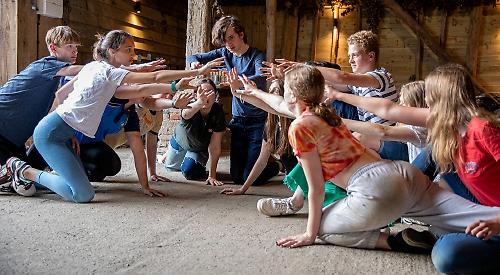 HENLEY’S Acorn Music Theatre Company is returning to the stage for the first time in more than a year with a show featuring six stories from the Brothers Grimm.

Tales for Fairly Grimm Times is playing in the barn at White Pond Farm in Stonor from Thursday to Saturday, June 24 to 26.

Evening performances will start at 7.30pm but the doors will open at 6pm to allow patrons to enjoy food and drink from the fully licensed bar, which has been named The Twisted Weasel for this production.

There is also a matinée performance on the Saturday at 2.30pm, with doors opening at 2pm.

Featuring a cast of 55 young people from the Henley area, the production takes as its starting point six folk tales collected by Jacob and Wilhelm Grimm in the early 19th century.

These are Clever Elsie, The Fisherman and his Greedwife, The Three Surgeons, The Elves and the Shoemaker, Aschenputtel (aka Cinderella) and The Wolf and the 17 Kids.

The first two tales have previously been performed by Acorn, which was founded 30 years ago, but the others are new for this year.

Writer and director Gail Rosier is the company’s artistic director and has been on board since the start.

A former drama teacher at Gillotts, The Henley College and the Piggott School in Wargrave, she says that each of the six tales has been reimagined and reinterpreted by the cast during weekly Monday night rehearsals at Greys village hall.

“We start off without a script, just with a story, and we take various bits of it — so, you know, we’re working on how does the wolf eat the kids. Or in Aschenputtel there’s a rowan tree, so the young people are improvising how do you create a rowan tree.

“It’s physical theatre, so everybody — even the very small people — are coming up all the time and saying ‘I think the wolf should do this.’ So we’re all collaborating and we keep workshopping it.”

For Gail, the choice to adapt the Brothers Grimm for the stage serves an important purpose in these covid times.

“The tales really reflect how you can’t shield young people from what’s going on in the world and they feel safer for addressing that kind of thing,” she says.

“For example, one of the new ones is The Wolf and the 17 Kids, and that’s being done with the very little ones in the group.

“And although, you know, they’re having the time of their lives being chased by Louis Bell, one of our adult helpers, who plays a very scary wolf, it’s also reassuring that we’re addressing scary things.

“Putting it in a fairy tale makes it an edible thing, doesn’t it? You know, you can be scared but then you can be reassured.”

Gail says: “They’re an ensemble cast, so although there will be Louis as the wolf and various things like that, everybody has lots of roles to play and swaps in often. And because it’s physical theatre we create everything on the stage. So the physical theatre combined with the live music makes it a very dynamic thing.”

As was the case two years ago, when Acorn staged The Green Man and Other Fables at White Pond Farm and then at Blenheim Palace, the musical side of the production is being overseen by folk singer-songwriter Megan Henwood, who was a member of the group while growing up in Henley.

Megan, a regular performer at Nettlebed Folk Club, has forged a successful solo career, releasing three albums. In November she will be touring with Story Song Scientists, her band collaboration with Scottish folk musician Findlay Napier, to promote their forthcoming EP, Quantum Lyrics.

But for now the 33-year-old is greatly enjoying working with Acorn again, having first joined the group at the age of eight.

“I remember being 17, 18 and still being involved,” she says. “Because when you start at Acorn you’re a seed, then you get a little bit older and you’re a sapling and then you become an oak.

“And once you’re an oak — when you’re in Acorn you’re always in Acorn. It has been a joy to be able to kind of go back and see more young people being so positively affected by it, as I was.”

Over the years the group has seen a number of members go on to careers in music, theatre, television and the arts with many subsequently returning to help out with new productions.

One notable alumnus is Toby Marlow, co-writer of the West End and Broadway musical Six, which tells the story of Henry VIII’s wives in the form of a pop concert.

Recalling her own early membership of Acorn, Megan says: “I wasn’t particularly keen on performing or acting but I was able to sit in the corner and play some music and still be part of it and still feel very involved.

“You know, everyone is an integral part of whatever’s happening — whether they’re standing in the corner being a tree or whether they’re on someone’s shoulders shouting up words, everyone’s kind of equal.”

The same creative ethos persists to this day, with Megan adding that her work on the current production with cast members and percussion specialist Nikki Nieduszynska is very much an open collaboration.

“It’s very collaborative. I’m there just to kind of facilitate all the amazing ideas that the young people are coming up with.

“And for me that’s just so fun because the ideas just flow out of them in a way that’s so organic and just fits with whatever’s going on on stage in a really beautiful way.”

Following the announcement that covid restrictions will continue until July 19, a spokesman for Acorn confirmed that in order to allow for social distancing, audience numbers will be strictly limited.

He said: “Tickets must be booked in advance and will be allocated on a first come first served basis. There will be no ‘walk-in’ tickets available on the night.”

Tickets cost £15 for adults and £10 for children and full-time students. Under-threes go free but must sit on knees. To book, email acornmusictheatre@gmail.com