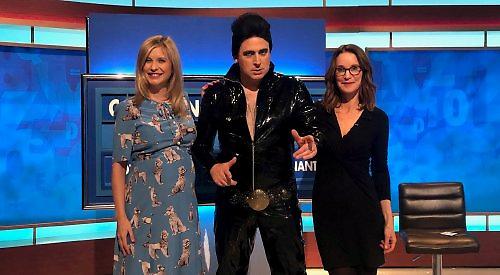 BELOVED of a passionate fanbase and garlanded by awards judges, comedian Tim Vine is taking a sharp left turn from his career as a one-line gagsmith and punmeister extraordinaire.

Ladies and gentlemen, for one tour only (maybe) we introduce to you... Plastic Elvis!

The idea for this new touring show, which visits the Wycombe Swan next Friday (October 29), is somehow simultaneously daft as a brush and not as crazy as it sounds.

A fan of Elvis Presley since he was a lad, Tim, 53, is merely paying homage to the man who has entertained and inspired him the most over the course of his life.

“He’s by far my biggest showbusiness hero,” says Tim. “I’ve got a picture of him in every room in the house. In a way, this is actually an act I first practised when I was 11. I used to mime to the Madison Square Garden 1972 album, so really I always wanted to do an Elvis tribute act — I’m pretty sure I’m the only one, aren’t I?”

The Elvis impersonator industry thrived in the years after the King’s death in 1977, but the record books actually mark 1954 as the moment when the first man stuck on some blue suede shoes in tribute. While the type of impersonator is wide and varied, Tim knows where his own act will be pitched.

“I am trying to do an impression of him and in-between songs I do talk as Elvis, so I can’t help it being funny in a way. Some might see that as being a little bit tacky or something, but I just want to go the whole hog and walk on and try to be him all the way through.”

As well as getting the voice and the wit right, Tim knows he has to get the look and stage manner spot on too.

“There are some leg moves in there and the suit I’m wearing is uncomfortable. I might be at my thinnest ever at the end of this tour — if I’m still alive. The suit is plastic, it doesn’t breathe, so the sweat stays in there. What I’ll do is turn the suit inside out and hang it up.”

Tim was encouraged by a friend and fellow Elvis impersonator to try out his act firstly in a pub and then in an arts centre and used a backing track. But he has upped the ante and now appears with a full live band.