Look at funny side of love and loyalty 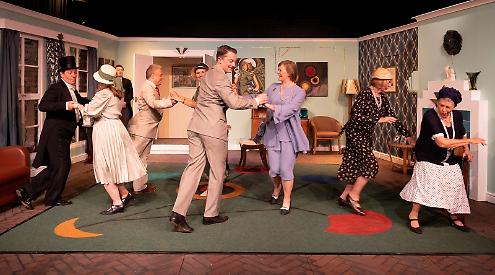 FOR a great evening out, take a trip back to the Roaring Twenties with the Sinodun Players’ production of Somerset Maugham’s The Constant Wife, directed by Chris Harris.

This irresistible show offers the audience plenty of laughter alongside an examination of traditional social values from a different angle.

In the gossipy drawing room atmosphere, Jo Sokolowski hits just the right note as the opinionated Mrs Culver, while Amanda Woodbridge perfectly captures the rather acerbic concern of Martha Culver for her sister Constance Middleton (Caroline Malnick), who is being deceived by philandering husband John (Matt Phillips). Malnick is bright, breezy and poised as Constance, the wife who refuses to be a victim and instead chooses to deconstruct love and marriage with cool logic to claim her independence.

Phillips is likeable and believable as the rakish John, who conducts an affair with his wife’s friend Marie-Louise (played with flirty high spirits by Hannah Smithson), only to realise what he risks losing. Len Pannett sympathetically portrays Constance’s devoted old flame, Bernard.

A special round of applause for Sue Brown, who stepped into the role of Barbara Fawcett at the last minute and very ably. Peter Smithson as long-suffering butler Bentley and Adam Brimley as Mortimer Durham complete this accomplished cast.

Cast members rise to the challenge of Maugham’s witty dialogue with crisp delivery and plenty of verbal sparring.

Elegant costumes by Jan Castle and Anna Gordon are easy on the eye and reinforce the period feel.

Well done to everyone involved in this splendid comedy of manners, which will challenge your ideas of love and loyalty.