Love, greed and death... a fascinating exploration of a local legend 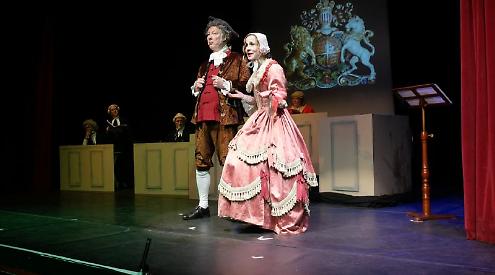 THE Kenton Theatre, the apparent host of the ghostly apparition of Mary Blandy, was the perfect venue for a “retrial” of one of the most notorious legal cases in local history.

Mary was originally found guilty of murdering her father some 270 years ago.

The original jury took just five minutes to reach a verdict before she was condemned to death by hanging at Oxford Castle.

It’s fair to say that back in 1752, it’s likely that the jury of 12 men were not entirely impartial or fully informed in reaching their verdict.

The play takes the form of a retrial and is based on a re-examination of the evidence from the original trial transcripts as well as further evidence that came to light afterwards.

On stage, a mock courtroom transposes the historic trial into today’s world and criminal
procedures.

The result is a play that is quite lengthy. It would be possible to stage around 24 original Mary Blandy trials in the time it takes for the evidence to be presented purely in the form of entertainment.

This is not to say that the play drags at all, or that it doesn’t take its subject seriously. Neither is true.

The work done by writer Mike Rowbottom in finding the line between serious exposition and keeping proceedings entertaining is deftly executed.

The cast do a great job of inhabiting their characters with Mary (played by the truly excellent Heather Trevis) and her suitor William Cranstoun’s olde-worlde demeanour juxtaposing acutely with the surroundings of a modern-day courtroom.

Some deft comedic touches bring a little light to procedures, such as Mary’s astonishment at mobile technology and dating apps, and some great one-liners delivered by the clerk to the court played by Richard Pinches.

Thankfully, these comedic sidesteps don’t take the play too far away from its purpose or treat the original case with too much levity.

What is clear from the evidence presented at the retrial is that Mary was almost certainly manipulated into administering the poison to her father that ended up with them both dead and her name tainted as a cold-hearted murderer.

In this day and age, consideration would have been given to her mental health and of the manipulation and coercion meted out by Cranstoun.

In breaking the fourth wall, the play invites the audience to play the part of the jury and a vote is taken at the end of the presentation of the evidence.

Returning a verdict of manslaughter for Mary, the audience at the Kenton found a different verdict to the original jury. Tellingly, the noose that hung over the stage at the play’s introduction did not return.

Whether this inventive piece of theatre will help lay Mary’s spirit to rest is anyone’s guess.

While it is 270 years too late for justice to have been done, this retrial was a fascinating exploration of a local legend.

While many things have changed over the years, the key motivations behind the tale of Mary Blandy are still present today.