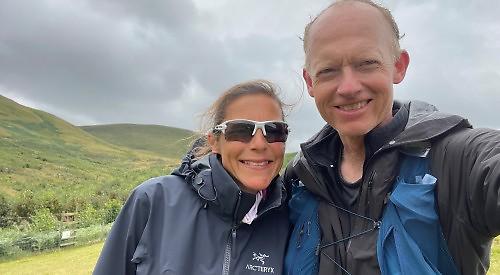 AN endurance athlete from Henley has set a record despite bad weather, sickness and a leg injury.

Anna Troup ran 268 miles along the Pennine Way in 72 hours and 46 minutes, the fastest known time (FKT) for a woman.

She beat the previous record, set in September last year, by more than an hour-and-a-half.

This was despite going without sleep and having to run the last 60 miles with a swollen leg after injuring her quadriceps, the powerful muscles in the thigh.

She did it just two months after completing the Montane Summer Spine Race along an almost identical route from Edale in Derbyshire to Kirk Yetholm in the Scottish Borders in a women’s record time of 80 hours and 28 minutes.

The 51-year-old mother of two, who works in finance, was able to go faster the second time as she had the help of a support crew and did not have to carry her own rucksack.

The crew, including her partner Richard Staite, were able to help when the area above her left knee swelled to twice the normal size and she considered pulling out.

Ms Troup said she was “thrilled” to have set the record, especially as she had not properly recovered from completing the previous race and the Montane Lakeland 100, a 25-hour fell race, three weeks earlier when she was also the fastest female.

“Deciding to do the Pennine Way FKT was all a bit rushed,” she said. “There was a window of opportunity around holidays and other commitments and we only had about two weeks to plan. I guess I was not properly recovered from the races but I just decided to do it anyway.

“The weather was terrible. The ground went from being dry to boggy and it was misty and all that can derail you.

“I started the run slowly and my support runners were really looking after me by making sure I kept eating. However, I think I must have eaten too much in the earlier stages because I ended up with an upset stomach and feeling very nauseous.

“Around 30 miles in I stopped for a quick sleep and I stopped eating for a bit and that helped.

“I felt okay again after that and then I just trusted myself to eat when I was hungry.”

She ate marmalade sandwiches and cheese and tortilla wraps and said: “I didn’t really have a nutrition plan and just relied on feeling hungry and eating what I fancied.

“Having a support van with a choice of food made a big difference to the run.”

She had only a series short naps during the challenge,

“I am pretty good at not sleeping on these things,” she said. “I laid down for a total of 40 minutes and I’m not sure if I slept for much of that. Somehow I can keep going with these sorts of long-distance runs.”

It was when she had only 60 miles to go that her leg suddenly started to hurt and her knee ballooned.

Ms Troop said: “It was a very painful last 60 miles and every step was difficult. We were having to make decisions on the hoof about whether or not I would be able to carry on.

“The injury made it hard to go up hills. I could do the flats without too much pain but the problem with the Pennine Way is there’s not too much on the flat.

“It could have been a problem if I had decided to go up to a point that I then couldn’t get down from. Richard did the last 27 miles with me.

“Everybody really wanted it to happen but never at the expense of me suffering a serious injury. I was thrilled to do it because so many people had given up their time and were so invested.

“As I’m a bit older, a lot of people that were sending me messages were quite excited because it goes to show you don’t have to stop running the minute you hit 30.”

Ms Troup first met Mr Staite, who also works in finance, when they rowed for Oxford and Cambridge Universities respectively.

They now live in Lambridge Wood Road and have two daughters, Milly, 18 and Bella, 16.

Mr Staite is a keen mountaineer and also did the Lakeland 100.

Ms Troup took up running in 1994 and since then has competed in numerous iron man triathlons and ultra-marathons.

Despite her experience, she had not expected to set a record, especially having been out of action for a significant part of last year with a broken foot.

Ms Troup said: “You are never confident. Over that kind of distance, anything can go wrong.

“I had already done two endurance events in quick succession and to do three in the space of two months does not give you a big recovery time.

“Because I spent most of last year being injured, I didn’t want another major injury. In the back of my mind I wanted the record but it wasn’t going to be at all costs.

“My plan for next year is to go again with fresh legs that haven’t raced twice in the previous six weeks and to try to go sub-70 hours. If everything goes right, that is perfectly doable.”