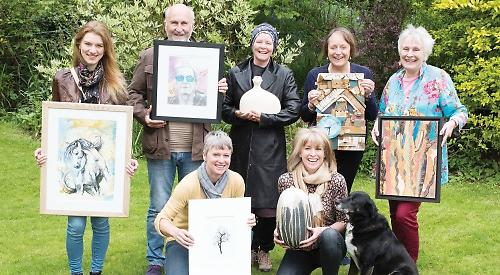 This year, Bucks Open Studios offers the chance to view the work of more than 500 artists and makers in over 200 working studios, galleries and other venues.

Together, they have created an artists’ trail of five different venues that they are inviting people to visit on Fridays, Saturdays and Sundays until June 25.

A spokesman for the group said: “You can see paintings, textiles and ceramics in the studio at Judith Fletcher’s riverside home in Mill End, where she’s exhibiting with Bronwen Coussens and Yolande Nye. Then go on to June Kingsbury’s studio in Skirmett. Sophie Fois, a young graduate specialising in realistic animal portraits, is in Turville, while Rachel Wallace’s photography and Graham Lewis Heron’s watercolours can be seen in Lane End.”

For more information on artists, locations and opening times, visit the website www. bucksopenstudios.org.uk/
open-studios/trails and click on “Hambleden Valley”.