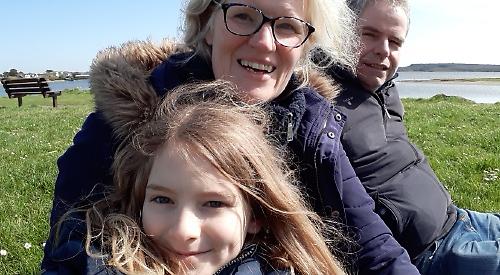 AN artist will be appearing on a BBC One show on Thursday.

Nicolette Carter specialises in landscape paintings and was selected to take part in Home Is Where the Art Is, hosted by Nick Knowles.

The 55-year-old has been a professional artist for more than 30 years and she divides her time between painting and teaching at Brimpton Primary School in West Berkshire.

The show selects three artists per episode and asks them to pitch an idea for a client. The successful artist wins the prize of the commission.

They are each given a brief and tour of the person’s house and the show ends with one of them being selected to bring their idea to life.

Mrs Carter, of Kelso Mews, Caversham, lives with her husband James Reed, 60, who recently retired having worked for HMRC in compliance for 31 years.

They have a nine-year-old daughter, Francesca, who attends Caversham Park Primary School.

When she was approached to be part of the show, Mrs Carter originally thought it was a scam.

She said: “They have researchers on the show who look for artists that can meet a brief and there are 45 artists being showcased across 15 episodes.

“Some people apply but I actually got asked to do it. They emailed me several times and then they rang me. It was a real bolt from the blue. I was really nervous to do it initially.

“I have always been professional and I have been sending my artwork all over the world on social media during lockdown. They wanted to pick artists who could match a particular style.

“The location was incredible. It was hundreds of miles away and it was a really historical and romantic place. You get to look around and try to guess which sort of people own the property and come up with an idea of what they might want.

“We then went to the television studios in Manchester to introduce ourselves to the buyers and they whittle it down to two people.

“They then have to choose someone, but I can’t say which stage I got to. I can’t say where the house was, but it was a long way from Henley and involved lots of travelling by train.”

Filming took place in October but the scheduling was delayed by the coronavirus pandemic and Mrs Carter appears in the penultimate episode of the series.

It involved staying away from her home for two nights and her pitch was specific to the location, taking historical inspiration that was special to the owners of the house.

She has worked on many commissions, from miniature paintings to playground murals, and described it as “a once in a lifetime opportunity”.

Mrs Carter graduated from West Surrey College of Art and Design, but decided to enter teaching alongside doing painting. She said: “I had many years teaching children with special needs, probably for the first 15 years of my career. I always wanted to do something that involves giving back to the community, which I can get from teaching.

“I love my artwork as well and I think art is incredibly important. A lot of my work is inspired by buildings and the local landscape.”

Mrs Carter has had her work displayed at the Tiny Art and Craft and Old Fire Station galleries in Henley. She is also part of an artist-owned gallery in London called Skylark Galleries, which will re-open at the end of July. She said: “I have been with them for 21 years and we very sadly had to close down for the lockdown. We have had to really fight for the business and there have been lots of applying for grants. We are really delighted about that and the Tiny Gallery in Henley has re-opened as well.

“I used to live in south London until 11 years ago and it was lovely to move to such a wonderful and inspirational place. Whenever I drive over to Henley, the landscape always inspires me.”

Mrs Carter has been teaching vulnerable children and the children of key workers during lockdown and her daughter has been home-schooled. She hopes the experience of being on television will boost her reputation and possibly lead to more work in the future.

She added: “I really enjoyed it. It was like a huge adventure and I felt very proud to be a part of it. It makes art more accessible to people who might watch the programme.

“Because the filming was done last year, I have had to keep it a secret from all of my friends and I have had to bite my tongue. It was lovely to have a challenge to work on something like this.”

You can see if Mrs Carter is selected as the winning artist by watching her show at 3.45pm on Thursday.