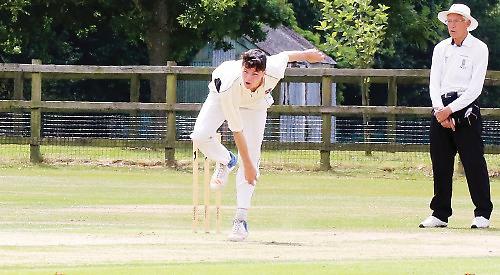 A TEENAGE fast bowler from Kidmore End made his debut for Middlesex 2nds earlier this month in a match against Gloucestershire 2nds.

Speaking after his debut Rogers said: “I had a nervous start. I bowled 11 overs for 49 and feel I learned a lot – especially from the experienced players in the side. These games are all about learning to make myself the best cricketer I can be in the future.”

Rogers trains with Middlesex twice a week and plays matches for his various teams at the weekends.

Rogers says his coaching at Blue Coat from Berkshire’s director of youth cricket, Mark Allum, has helped. He said: “He’s helped a lot throughout my career, especially with my fast bowling and it helps that Blue Coat is the outdoor centre for Berkshire Youth Cricket.”

James is the third Rogers brother to attend Blue Coat, and he has been Deputy Head Boy of the Sonning school for the last year where he is currently studying for his A-levels.

Blue Coat’s head of cricket, Phil Davies, said: “James is a very driven character and has shown real maturity in balancing his time between his studies and playing. We all really want him to do well and have a summer full of cricket, picking up lots of wickets for the school and for Middlesex.”

Rogers, who hopes to study sport and exercise science at Leeds University after taking a year out to focus on his cricket, added: “My aim is to become a professional. I progressed a lot over the winter and I hope to keep progressing over the summer.”