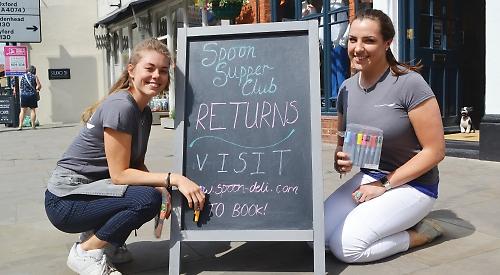 THERE was a time in Henley not too long ago when the subject of A-boards around the town caused a bit of a fuss.

But the row about the number of advertising boards on the street has long since died down and one café likes to use theirs to raise a smile.

Anyone who walks regularly down Duke Street would have noticed the A-boards outside Spoon.

Every day one appears on the pavement outside with a thought, fun fact or some good humour.

The signs are written by manager Annie Gray or her colleague Abbey Gillett every morning.

“It helps us to show our personality as a business,” Annie says. “It’s something for people to enjoy, provide a talking point or just put a smile on their face.

“We show what were about — healthy, wholesome and a bit of naughtiness.”

There are themes for what goes on the board, including motivation Monday, Tuesday thought, Wednesday wisdom, throwback Thursday, Friday feeling and something for the weekend.

Sometimes the messages are funny, and coffee related. For example one read “not having your coffee a day can cause a latte problems”.

Others first appear to be more serious — “during the reign of Elizabeth I there was a tax put on men’s beards (luckily, hipsters weren’t a ‘thing’ then!)”.There are even light-hearted bits of advice such as “espresso yourself, stay grounded, better latte then never! Take time to smell the coffee”.

They even teach the public new words including “procaffeinating”, which they define as “(noun) the tendency not to start doing anything until you’ve had a cup of coffee!”

Sometimes Annie and Abbie use the national calendar for inspiration. On St Patrick’s Day, the sign said “seeing as I didn’t get a pot o’ gold this morning… I shall settle for a pot o’ coffee instead!”

But Annie says she also likes to educate the public on the coffee they are drinking. “We want to help people learn about coffee,” she says. “I wrote americano on the board then scribbled it out and wrote black coffee. I wrote flat white and crossed it out and put white coffee.

“A cappucino is frothy coffee. People get so confused when they go in a chain and order a bigger size then add a shot of coffee — they aren’t drinking what they’ve ordered.”

Annie says the boards get lots of interest on social media. “Customers come in every day and comment on it,” she says. “It puts a smile on their face and they look out for it.  I posted a picture of sign which said ‘when you buy from a small business, a real person does a little happy dance’.  There was a lot of traffic from that, people really engaged with it.”

Annie says, in the end, they want to help brighten up people’s day. “You’ve got to have a bit of laughter whatever you’re doing,” she says. “You never know if someone might drive or walk past who is not having a great day and it could make them feel better.”