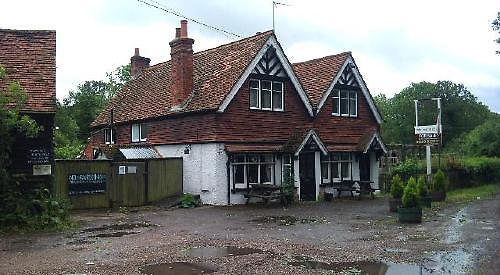 DR Hawley Harvey Crippen was 48 when he was hanged in London in November 1910 for the murder of his wife.

When Cora vanished in February that year, he claimed that she had returned to the United States, where they were both from.

But he was exposed when her dismembered body was found beneath the cellar of his Camden home following an attempt to flee to Canada with his cross-dressing mistress.

There was an immediate hue and cry so it was no surprise that sightings of the couple were reported up and down the country.

One of these was at the Dog and Duck pub in Highmoor (which closed in 2012), where Crippen was said to have ordered afternoon tea. It was claimed that he was waiting for Ethel le Neve to return from Nettlebed Common, where she was out walking while dressed as a boy.

Roger Dalrymple, a lecturer in education in Oxford, has written Crippen — A Crime Sensation in Memory and Modernity in which he re-examines the case.

In it, he looks at how the story captured the public’s imagination, analyses how criminality was represented at the time and the influence it has had on the development of crime fiction.

Mr Dalrymple, 49, said: “A lot of the sightings spread because the story was interesting. It had sex, murder and cross-dressing — people got excited by it.

“Crippen was quite an eccentric figure. He had this connection with music hall through Cora, who performed as Belle, so he had a certain amount of profile.

“He was also a homeopath who would send out medicine to people who had illnesses or health problems such as cures for deafness.

“A lot of the sightings come from the areas where people had written to him so I wonder whether someone from Nettlebed, Stoke Row or Henley had written to Crippen.” The story goes on to say that at the pub he asked for jam without pips because of his false teeth and Mr Dalrymple says that while this is unlikely to have happened, Crippen did have false teeth.

He added: “All these sightings must be taken with a pinch of salt. Someone on their holidays had said they saw him wearing a straw hat on the French and Spanish border. He most likely went straight to one of the ports and got on a boat.”

Crippen was arrested on board SS Montrose, bound for Canada. Wireless telegraphy was used for this purpose for the first time.

Mr Dalrymple says: “It was only when he ran away that he really came under intense scrutiny. He was due to give up the lease of his home in September but bolted in July. They found the remains in early August and it was decided that it was the body of his wife before the trial.”

Crippen had tried to argue that he wouldn’t get a fair hearing because the press reports were being written to liken him to other murderers.

Mr Dalrymple says: “In London there had been a Dr Jekyll and Mr Hyde stage show and that story was leaking into the stories that were being written about Crippen. They would say things like he was a doctor by day and murderous at night. This also helped to spread the story. This made a doctor a stage villain and it resonated with people.”

Crippen was advised to plead guilty to manslaughter on the grounds that he had just wanted to sedate Cora but he refused to accept that she was dead.

Mr Dalrymple used the National Archives and Home Office files as part of his research for the book. Sir Winston Churchill, who was home secretary at that time, refused to commute his death sentence when there was an appeal.

In 2007, some American academics claimed the dead body was not Cora’s and that Crippen was in fact innocent.

Mr Dalrymple doesn’t question whether it was a safe conviction but is fascinated at how Crippen’s case influenced so many detective writers and stories, such as Agatha Christie, who lived in Wallingford, and how the tale, or variations of it, keep cropping up in literature, television and film today.

He adds: “Dr Crippen still conjures up this image of the bogeyman and writers are still retelling it. He had a first wife who died shortly after childbirth which people are examining now, so the story does go on.”

• Crippen — A Crime Sensation in Memory and Modernity is released on Monday and is available from Amazon, priced £45.