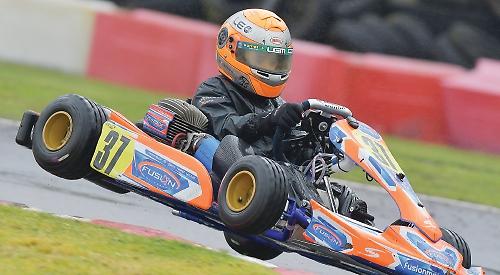 The nine-year-old races in the highly competitive cadet class for drivers up to 13 years of age, using identical engines and weight normalised karts that reach speeds of up to 60mph.

The qualifying session on Friday was held in wet conditions which normally suit the Henley youngster.

Despite having to pass a series of slower karts, Robinson, the youngest competitor in the competition, still managed to qualify in the top half of the grid in 15th position.

The first two heats on Saturday were also held in wet conditions. Robinson performed strongly gaining seven positions in each race and scoring valuable championship points. The third heat on Sunday was on a damp, but drying track. In common with most of the front runners, Robinson elected to use slick tyres. These proved significantly slower on the initial laps with Lambridge Wood Road youngster losing most of the positions that he had gained in the previous heats. Towards the end of the race, however, a series of committed passes allowed Robinson to recover some of the lost places.

The track was completely dry for the final and the earlier experience on slick tyres stood Robinson in good stead. He made rapid progress in the first three laps moving up to sixth position. An overly ambitious passing attempt resulted in Robinson running wide and losing some ground to the front five karts. Robinson then delivered a series of fastest laps to chase down the front runners and gained one more place and pulled clear of the chasing pack into a safe fifth position.

Robinson’s efforts were rewarded with a trophy for fifth place and, most importantly, the trophy for the top rookie which is for drivers in their first year of Super One competition. Robinson now leads that class in the championship standings.