Waitrose wouldn't sell me beer because granddaughter had no ID 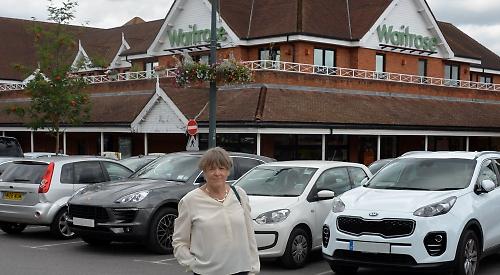 A GRANDMOTHER has accused Waitrose of ageism and sexism after being stopped from buying lager from its store in Henley.

Leda Patten, 76, of Cromwell Road, Henley, had a four-pack removed from her shopping at the checkout when her 22-year-old grandaughter was unable to show proof of age.

When she protested, she was told that it was company policy not to sell alcohol to shoppers who are accompanied by people who are under age or can’t prove they are not.

She said: “It has left a very bad taste in my mouth.

“If I wanted to take anything from it — and if I were a sensitive soul — I would say it was ageism and sexism. I doubt it would have happened if it was my husband or my son-in-law.

“Ageism is definitely a factor and I can tell you that it is just as uncomfortable as any other kind of prejudice.”

Mrs Patten was shopping with her granddaughter Rose and grandson Tom, 20, at the supermarket off King’s Road on Tuesday evening last week when the incident happened.

She said it was a warm evening and she put the Staropramen, a Czech lager, in their trolley to enjoy with their dinner at home later on.

In a letter to this week’s Henley Standard, Mrs Patten said: “We arrived at the check-out with a trolley full of various items.

“As my grandson stood packing my bags, the man at the till removed the beers from the belt and demanded to see his identity, which was promptly produced, although I found this extraordinary in itself because this was my shopping being paid for by me and I said so.

“Not satisfactory, according to the man on the till who then demanded the identity of my granddaughter who did not have it with her because she was just along for the ride and is not under-age, which I explained.

“The beers were then firmly removed and put on one side and I was told that I could not buy them.

“I reiterated that as a 76-year-old I am perfectly entitled to buy alcohol whoever I may be shopping with and this was my shopping being paid for by me.

“Apparently, retailers’ rules seem to require that when adults are shopping with teenagers or young adults who may appear to be under-age, proof of identity is required from everyone.

“I asked for clarification on this and another member of staff who looked young enough to be challenged himself came to the till and said he was sorry but he could not overrule his colleague.”

Mrs Patten said she paid for the rest of the shopping and asked her grandchildren to take this to their car while she protested again.

She said: “I stood my ground and said I would now pay for the beer only to be told that was impossible, the implication being that I might be aiding and abetting under-age drinking.

“Stomping off to the enquiry desk as only an enraged grandmother can, I asked to see a manager and waited around until an obviously young female member of staff wearing a customer service badge appeared to reiterate that this was company policy. My grandson then bought the beers from Sainsbury’s for me but the whole experience left me with a very sour taste and desire to shop somewhere else.

“I asked my husband what he would have done and his response was that he would have left the shopping on the conveyer belt and walked out because of the direct insult to his own integrity and right to buy what he chooses.”

Mrs Patten, who began shopping at the store when she and her husband Michael moved to Henley from Teddington eight years ago, told the Henley Standard she was “really cross”.

She said: “I would say they failed on two counts — they didn’t sell the beers to me and the complaint was handled badly. I thought it was a shortfall from the management. I have run a business myself with my husband and the test of any business is how they deal with complaints. That is the test of customer service.

“If they were clever, they could have turned it around but they have been very stupid about it.

“I would warn parents filling their trolleys with weekend supplies and bottles of wine that if they have teenagers with them they may be challenged if the relevant identity cannot be produced — a farcical misuse of the letter of the law.”

A Waitrose & Partners spokesman denied the company was sexist or ageist. He said: “We’re very sorry Ms Patten was unhappy with the experience she received and we’re investigating what happened.

As a responsible retailer, we have a legal responsibility when selling alcohol to prevent it being purchased by anyone under age.

“In line with many other retailers, our cashiers will ask for proof of identity from anyone buying alcohol who they believe to be under 25 and, if one of our cashiers believes alcohol could potentially be purchased on behalf of an under age person, they are always encouraged to take a precautionary approach and check the identity of both customers.”