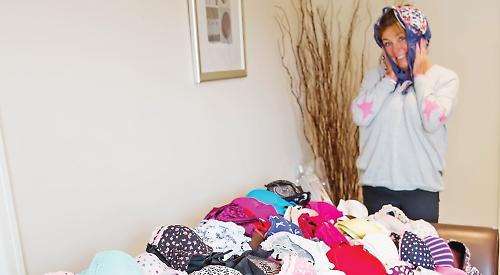 A WOMAN has collected more than 500 bras to donate to needy young women in Africa — but still wants more.

Heidi Leigh, of Ridgeway, Wargrave, is supporting a charity called Smalls for All and has asked friends, family and neighbours to help by donating their unwanted bras. She hopes to reach a total of 1,000.

The bras will be delivered to the charity’s base in Scotland before being taken overseas.

Mrs Leigh, a 51, a registrar at Claires Court School in Maidenhead, began collecting in February after seeing an article about the initiative on Facebook.

She said: “The article had been shared by one of my friends. It said they wanted old, unwanted bras for the charity.

“You donate bras and if they are of a good size and standard they are sent to Africa to the girls in villages there.

“If they are no good they strip the metal and material and sell them both to raise money to buy sanitary wear and pants.”

Mrs Leigh said she was moved by the article.

She said: “I don’t have daughters but what really grabbed me is that when a lot of young girls start their periods they don’t own a pair of knickers, let alone sanitary products. How degrading that must be for them.

“Girls without underwear can be seen as being in poverty, which makes them more likely to be a target for rape.

“The fact that they are just wearing a bra can make attackers stop and think they have got a bit of money so it protects them. This is something so basic.”

Mrs Leigh began stockpiling her old bras and appealed for others to give her theirs.

Now she regularly has bags of bras left on her doorstep by people she doesn’t even know.

“I’ve been overwhelmed by the support,” she said. “Some young girls have given me bags full of bras and usually the right size.

“I mentioned it to my colleagues at work and they all chipped in.

“The deputy head of the sixth form had a chat with the girls and they had a collection box. I didn’t think it was going to be like this but now I just don’t know where they are going to come from.

“One lady brought a big bag full of bras from her three daughters, who at their age buy lots of cheap bras.

“I even messaged some men, saying there’s probably one bra you hate in your wife’s underwear drawer so go and pinch it and give it to me!

“I had an email from one man who had lost his wife a year ago and hadn’t been able to remove her clothes and send them off to charity, so they were still in the closet. He said I had spurred him on and given him a reason to recycle his wife’s clothes.

“It’s amazing the people you touch with something a little bit different.”

Among the bras she has collected are several with bright colours and striking patterns but Mrs Leigh says the standout item was one with a Union flag design.

She has now received so many bras that she has had to store them in her attic at home where she lives with husband Bernie, 55, and sons Alex, 17, and Mike, 21.

She said: “Bernie and the boys will get home before me and there will be another bag on the doorstep. Some people also leave nice notes which are really appreciated because I don’t know who lots of the bags are from.

“The boys don’t mind talking about bras and personal stuff. They think it’s hilarious and just go with the flow.

“I need to keep them clean so I put them in tissue paper in old suitcases but they are so heavy — I’ve got two-and-a-half cases full now.”

Mrs Leigh has received an offer from a friend to pay for the bras to be transported up to Scotland.

She said: “I didn’t realise that we would have to pay for the carriage to Scotland. Bernie said we would drive up with a carload as a road trip.

“Soon afterwards a friend of mine came to dinner and his wife brought some bras. He offered to cover the carriage to get them to Scotland so that’s quite a costly thing he’s saved me from.”

She said: “You know some of them have cost a fortune and they are gorgeous colours.

For information on how to donate, send an email to Mrs Leigh at
fourleighs@btinternet.com