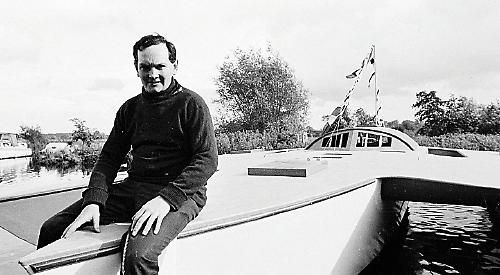 MOST of us have mementoes tucked away in a drawer or attic but rarely do they regain their original significance.

Not so Noel Armstead’s pristine copy of a souvenir edition of the Teignmouth Post in July 1969.

This commemorated the life of amateur sailor Donald Crowhurst who died while competing in the Sunday Times Golden Globe Race, a single-handed, round-the-world yacht race that started and finished in the south Devon town.

He had entered in the hope of winning a cash prize to aid his failing business.

Instead, he encountered difficulties early on and secretly abandoned the race while reporting false positions in an attempt to appear to complete a circumnavigation of world without doing so.

He eventually committed suicide by throwing himself overboard his 41ft yacht Teignmouth Electron, possibly due to insanity.

Now the story has been made into a film called The Mercy, starrring Colin Firth as Crowhurst and Rachel Weisz as his wife Clare, which is released today (Friday).

Noel, who has been writing reports on Henley Rugby Club for the Henley Standard for more than 25 years, grew up in Teignmouth and was there when the souvenir edition was printed.

It was due to be published to celebrate Crowhurst’s achievements and was based on his radio transmissions to reporter Rodney Hallworth which turned out to be false. When his death was announced, the newspaper published the souvenir to raise money for the sailor’s family.

The eight pages included a profile on Crowhurst, the build-up to his departure, a map of his route, information on his expected return and a first-person piece by his widow.

Noel, 82, found his pristine copy of the tribute last year. He had been in Teignmouth, where his parents still lived, on holiday when it was published.

Noel, a retired bank manager, says: “I’m a bit of a hoarder and I found the paper in an old box of family stuff.

“Crowhurst was missing for 180 days. It was a great point of interest for the people of the town. They wanted to see what happened but he had lost his way.

“He was broke and had hoped to make a fortune by doing the race. Everybody was so keen for him to come back, hence the special issue of the paper.

“A lot of the local fishermen were sceptical, though. They expected him not to make it. There was a lot of talk about it and whether he would make it back or not.”

Noel is excited about seeing the film as he will be able to compare the story with the one he knows.

“I heard about the filming when it was happening a couple of years ago and there was real excitement in the town,” he says. “Colin Firth is a world-leading actor.”

And when the fuss around the film has died down that old newspaper can go back into store.