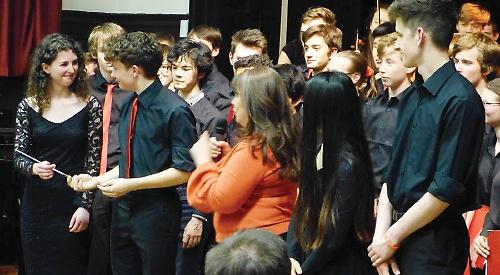 A TEENAGER from Wargrave is helping to organise a large charity concert next month.

Roisin Sharkey, 17, will be running the event with a classmate at Kendrick School in Reading, which will host it.

More than 80 young musicians from the school and nearby Reading School will take part in the concert, which is aid of the Thames Valley Air Ambulance.

There will be an orchestra, choir and wind band as well as soloists and an acapella group called Bantershop.

The programme will include the Imperial March from Star Wars, Sergei Prokofiev’s Symphony No.1, Believer by Imagine Dragons and a Pirates of the Caribbean medley.

The concert was first held in 2012 and organised by student Alicia Darrington to thank the air ambulance for saving the life of her brother Toby, a Reading School pupil, after he was hit by a car while cycling in Oxford Road in 2011.

Roisin lives in Purfield Drive with her parents Eoin and Mairead and brother Theo, 16, who will perform at the concert.

She said: “Since 2012, the annual concerts, cake sales and raffles that the students put on have raised more than £10,000 for the air ambulance, a life-saving charity that receives no government funding.

“I’ve taken part in this concert since I was 13 and know not only the massive amount of effort that goes into putting it altogether, but also the huge positive impact it has on both those who take part and those who find themselves in need of the services of the air ambulance.”

A conducting baton was bought in his memory and each year it is passed by the two students who have organised the concert to another two who are responsible for the following year’s event.

Roisin is sharing the role with Ewan Millar, 16, and they have already chosen next year’s leaders, including Kitty Gingell, who is also from Wargrave. Since first taking part in the concert, Roisin has performed in the orchestra, choir and wind band every year.

Her older sister Deirbhile, 19, was also a member of the choir a few years ago.

She said: “I have performed music such as The Lion King medley, Can’t Stop The Feeling, Dvorak’s Slavonic Dance no 7 and a Blues Brothers medley.

“A few years ago I took up a new instrument, the bass clarinet, because one of the pieces needed one and no one at our schools played it.

“I’ve since joined the Reading Symphonic Wind Orchestra on the bass clarinet and we played in a national competition on Sunday. I would not have been involved in that without the air ambulance concert.”

Roisin feels proud to be organising this year’s concert and is looking forward to the day.

She said: “Being in charge is an absolute honour and I couldn’t be doing it with better people.

“There’s a real community spirit among everyone involved and everybody chips in to help. There are a lot of very varied jobs to do so keeping track of all of them has probably been the biggest challenge but I’ve enjoyed every aspect, from baking cakes for the rehearsals to making posters and choosing the music.

“It has been great to see both the school communities coming together as well as the local community helping out by donating raffle prizes or buying advertising.

“It’s quite humbling to see what people will do for a good cause, even down to the year nines giving up their lunchtimes to come to choir rehearsals. It’s a unique experience that has made me all the more proud of my peers.”

The concert will take place in the Kendrick School hall on Friday, May 4 from 7pm.

Roisin has also set up a fund-raising page to raise money for the air ambulance. To donate, visit www.justgiving.com/fundraising/
reading-kendrick