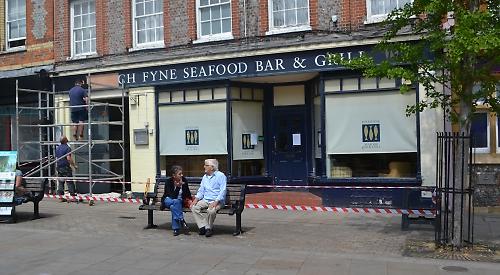 A RESTAURANT in Henley town centre has shut unexpectedly after almost two decades.

The Loch Fyne Seafood Bar and Grill, which opened at the former Old Jazz Café in Market Place in 2000, closed without prior warning on Monday.

The closure also affects Milsoms Hotel, which was based on the first floor.

On Tuesday, workmen fenced off the site with hazard tape and set up a scaffold before removing the signage.

A notice in the restaurant window directed customers to the nearest alternatives in Ascot and Wokingham.

It read: “We regret to inform you that after 18 wonderful years, Loch Fyne Henley is moving on. We would like to thank all of our incredible guests and the good people of Henley for your custom and support.”

The premises are owned by Catalyst Capital, as are the neighbouring former Spirited Wines unit and Market Place Mews, which are currently being redeveloped into 14 flats, nine shops and a restaurant.

Several other businesses have been forced to close or move as part of the multi-million pound scheme but Loch Fyne’s closure is not believed to be connected.

Greene King, which owns the restaurant chain, says it will contact customers who had bookings at the restaurant. The branch’s telephone is still being manned to answer queries from the public.

In a statement on its website, Greene King said: “We are sorry to say that our Henley restaurant will be permanently closed from May 20.

“The great news, though, is that there are many other fantastic Loch Fyne restaurants up and down the UK, including Oxford, Ascot and Wokingham.

“For now though, from all of us here in Henley, it’s thank you and farewell.”

Earlier this year, Greene King put the chain on the market for the second time after exploring a £100 million sell-off in 2016, when it also closed a string of outlets in the North and Midlands.

It bought the company for £68million in 2007 and had plans to double the number of sites.

Henley town manager Helen Barnett said: “The landlord is actively looking for a new tenant. This is in the same week as M&S has announced that it will be closing around 100 stores nationwide over the next five years.

“We must remember that Henley has a lower than average vacancy rate compared with the national average.

“Retailers and restaurants really need to reduce costs and increase efficiency in a challenging market where consumer spending is being squeezed and costs are rising.

“It is a changing landscape for our retailers. Most are looking to invest in online, refresh core systems and develop smarter, personalised offers in addition to rethinking the role of their stores.

“People want an experience when they shop and a good one with great customer service.

“Henley is somewhat unique in its demographics and we are trying to improve the visitor footfall, working with the attractions and hotels. It would of course help all our retailers if people shopped locally.”