Rowers back on water as virus restrictions eased 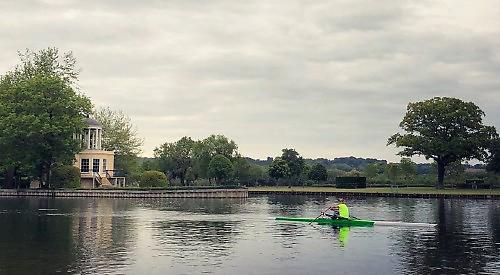 ROWERS in Henley are back on the water after restrictions introduced in the wake of the coronavirus were eased.

British Rowing has said that athletes can now go out for a recreational row in a single scull or they can row with another member of the same household, in line with government guidelines.

Athletes from Leander Club and Upper Thames and Henley rowing clubs have been off the water since March and have been working on their fitness from their own homes.

Many have been training using ergos and weights donated by their clubs as well as cycling, running and walking.

Events such as Henley royal and women’s regattas, due to take place this summer, have been cancelled due to covid-19 while the Olympic Games in Tokyo have been postponed until next year.

Alice Davies and Sam Redgrave, who are part of our Leander development squad, have lived together during lockdown and have started rowing as a pair.

Mary Wright and Lauren Irwin, two of the club’s younger under-23 athletes, live together in the town centre and have also been out together so, too, have Ryan Todhunter and Heidi Long, who live in the same household.

Wright said: “Lauren and I are so fortunate to live together as it’s great to be able to row a pair with each other. We have always enjoyed rowing together.”

Mark Banks, Leander’s director of rowing and chief coach, said: “It’s nice to see some boats going out on the water for a recreational scull but we are still far from resuming normal squad training. I wish all our members well and I look forward to welcoming them back to the club when it’s safe to do so.”

Members of Upper Thames have also returned to the water. About 25 rowers turned up at the club the day after sculling was permitted again.

Chairman Justin Sutherland said it was noticeable how the absence of powered river craft has contributed to flat, calm water.

However, he noted that in recent days this rowers’ luxury diminished as ever greater numbers of river users also returned, including paddle-boarders and open water swimmers.

Sutherland said: “It has not taken long for concerns about coronavirus to be superseded by more general safety issues brought about by the different types of water traffic.

“Of course, we are still making sure members observe strict cleaning protocols and social distancing but the main thing is that we are getting back out there and having a great time in our boats.

“Many of us have neglected our sculling over the years, preferring crew rowing, but no one has complained about anything and everyone is grateful to be enjoying the beauty and health benefits the Henley reach has to offer.

“We really are extremely fortunate to be able to row in one of the best rowing locations in the world, something that we never take for granted.”

Helen Turnell, who chairs Henley Rowing Club, said members had made a “cautious return” to the river, having liaised with other clubs on the Henley reach. The clubhouse remains closed but limited facilities are now available so that its members can row as part of their daily exercise.

They have also been encouraged to limit the time they spend at the club and have introduced a mantra of “arrive-row-leave”.

Turnell said: “We are lucky that we have space at the club to be able to boat and follow social distancing conditions and we have all worked hard to make it work. We are now introducing club doubles and pairs and individual and small group coaching.

“Henley Rowing Club has more than 100 junior members, so being able to introduce small group recreational coached sessions will enable them to safely use water activity as part of their weekly exercise, meet others and enable us to continue to support their mental and physical wellbeing.”

James Swinburn, 18, of Western Road, Henley, is a member of the J18 squad and is delighted to be back in a boat.

He said: “This is my sixth and last year of being a junior at Henley, having joined when I was 13. After a long hard winter season getting prepared for huge summer races such as Henley Royal Regatta and GB junior trials, lockdown came as a big shock and completely shut down all hopes of a summer racing season.

“At the time of lockdown I was training up to 10 times a week with the squad and loving every second of it. Throughout lockdown I have switched to training on my own with the coaches providing as much support as they can to keep us all motivated.

“However, it’s not the same training at home and missing out on the social aspect is even harder.

“Being told I was allowed back out on the water even in my single was amazing as I had missed getting on the water a lot. I was so excited to get to the club and head out in my single that I didn’t want to stop after I finished the first session.

“I’m so glad that everyone at the rowing club is respecting all the rules in place to keep us all safe while rowing at the moment and I look forward to the day that we are able to get back into crew boats again.”