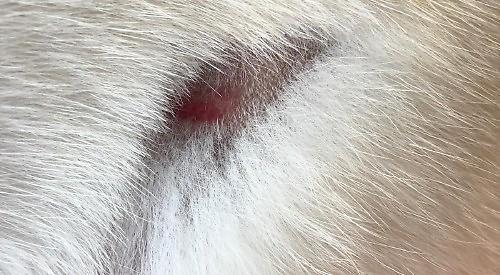 A DOG’S chest cavity was punctured when she was attacked by two large dogs while on a walk.

Mochi, two, a Shiba Inu, was with her owner Frederick van Mierlo when they came across a pair of German shepherds in a field near Bix, where they live.

One was on the lead with its owner but the other was loose and as the two parties approached each other it grabbed Mochi, lifted her off the ground and tossed her about.

The second German shepherd then joined in the attack until Mr van Mierlo intervened.

He said: “I jumped in between them and rugby tackled my own dog and lifted her up. The dog off the lead was still trying to attack her, jumping up against me. I lifted Mochi up to my head and she was injured and obviously very distressed.

“I tried to walk away but the one off the lead kept following me.  Eventually it returned to its owner, who was walking in the opposite direction.”

Mr van Mierlo, 30, said he couldn’t speak to the owner as he was leaving the field with his dog on the lead to draw the other one away and did not come back.

He called his partner Katharina Lotz, 27, who was working, and she drove to meet them before the couple took Mochi to Henley Vets in Reading Road. Staff there said she had sustained “significant” bruising in the attack and checked her circulation.

Mochi was given painkillers and an X-ray to check for internal bleeding.  She spent the night at the practice so she could be monitored.

She didn’t require surgery and is now back home but she can’t exercise at the moment and her breathing is very shallow. Mr van Mierlo said: “She has a punctured chest cavity, making breathing difficult but thanks to her thick fur the bite did not penetrate deeper into the lung, which could have been fatal.”

The couple, who moved to Bix from Brussels in March, now have to pay the vet’s bill of £800 as Mochi is not insured.

Mr van Mierlo said: “I was budgeting for a few thousand so I’m pleased it’s only £800.

“Still, we’re going to have to cut back and will have to find ways to make up for it. We’re having to draw on our deposit for a house.

He reported the incident to the police but was advised it was a civil, not a criminal matter.

Mr van Mierlo said: “I believe they’re dangerous dogs and at a minimum they should be muzzled at all times and on the lead.

“If it turns out that they have a significant record then I don’t know what steps need to be taken to correct that.

“While it was happening I was just trying to react and save my dog. If I had not intervened then they would have killed Mochi for sure.

“We were both shaken up a bit and at least two people supported us afterwards. They were very concerned. One offered to take me to the vets and helped me find my glasses, which I had dropped.”

Mr van Mierlo said the dog was very important to him and Ms Lotz.

“We love her and she’s our ‘child’,” he said. “We also love the area and Mochi loves going on walks and meeting other dogs.

“We’re really happy here so we’re extremely upset about this and it’s really devastating for Mochi.

“Unfortunately, the law seems to be inadequate in cases like these. The real worry is that these dogs might have a history of violence towards other dogs and next time it could be a child.”