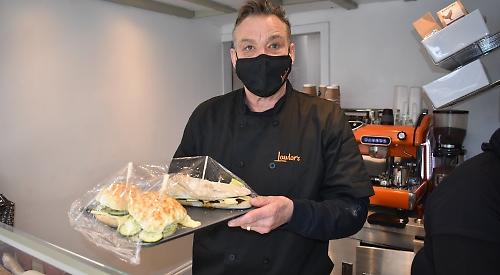 THE new Lawlor’s café in Henley has opened.

It is on offshoot of the bakery at Henley Enterprise Park, off Greys Road, which was due to close before being rescued by David Rodger-Sharp,

The café, which is in the former Sole Man cobbler’s unit in Duke Street, sells drinks, hot and cold sandwiches and sushi, which is delivered by a Japanese company daily at 3am.

Mr Rodger-Sharp, who owns the jewellery shops of the same name in Duke Street and Bell Street, runs the bakery with his business partners Andy Byerley and Marc Maslin, a chef.

Mr Maslin opened the café on Saturday and said trade over the weekend was “absolutely brilliant”.

He said: “I’m quite amazed. I knew it would do pretty well but it exceeded my expectations.

“We had 280 boxes of sushi and it sold out in no time, in probably two to three hours.

“The coffee was quite popular as were our sandwiches, which are made with bread from the bakery. We had some elderly people asking for the lardy cakes and iced buns but we are trying to move away from those and do more artisan products.

“We’re not in the main area near Falaise Square but when people start to know we’re here it will only get better.”

Mr Maslin, who works at the café with two other employees, said he may have to take on two other people if the success of the first weekend continued. He added: “We’ve invested quite heavily in bringing the bakery up to standards. We’re looking at getting a new oven as the current one is quite old.

“We obviously went to get it all up and running for when restaurants and business re-open in a few weeks’ time.

“I’m feeling quite excited about it. There are a few independents opening up already, which is nice.”

The café is open from 8am to 4pm Monday to Saturday and 10am to 2pm on Sundays.