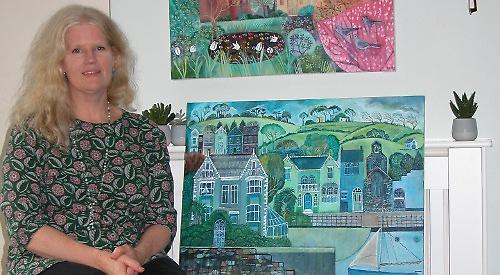 AN artist has become a published author for the first time thanks to her daughter.

Nicolette Carter wrote The Pink Peacock, a children’s story, 15 years ago but left it in a folder.

During the lockdown last summer, her 10-year-old daughter Fran found the manuscript and suggested sending it to a publisher.

Mrs Carter, 55, posted it to Austin Macauley, a London publishing firm, more in hope than expectation, but two months later she was told the book would be published.

She said: “It was a big surprise. It has taken on a momentum that I never expected.

“Sometimes you lose confidence with things or you don’t understand how to go about getting a book published but if you don’t take a chance then you will never know.

“Fran made this happen — she found it and encouraged me to send it off. I had almost completely forgotten about it.

“I hope it will inspire other people. I know there are lots of rejections in publishing but that shouldn’t put people off if it’s something they have faith in.” Mrs Carter lives in Caverhsam with her daughter and husband James Reed, 61, who has retired after working for HMRC in compliance for 31 years.

Fran, who attends Caversham Park Primary School, was being home-schooled when she went looking through her mother’s portfolio and found the story.

Mrs Carter, who has been a professional artist for more than 30 years, said: “She was thinking about writing her own stories and she asked me why I hadn’t submitted it.

“I had nothing to lose and just sent it off because she suggested it and thought it was a good book.

“She is really good at writing herself and has a very original take on things.”

The story is about Princess Rose, who demands a pink peacock. She is obsessed with all things pink but gradually comes to appreciate the world around her after the bird escapes.

All the illustrations were done by Mrs Carter, who specialises in landscapes, before she had written the story. She said: “I know that isn’t the normal way of doing things.

“I did the front cover first and I loved it so much that I based everything else on that.

“I ended up not being able to use some of the pictures once the story had changed. It took months and months and I didn’t realise how incredibly dedicated you have to be.”

The illustrations are inspired by a combination of medieval, Mughal and Islamic art.

“I think all of that gorgeous detail sent me down the route of making this book,” she said.

“I originally submitted the text only and the publishers said they would find someone to do the illustrations so I told them I already had them.”

Mrs Carter graduated from West Surrey College of Art and Design but decided to enter teaching and combine it with her art.

She is now literacy co-ordinator at Brimpton Primary School in West Berkshire.

She has worked on many commissions, from miniature paintings to playground murals, and she was selected to take part in the BBC’s Home Is Where the Art Is, hosted by Nick Knowles, last summer.

She won her episode and the prize was to paint a commissioned piece for a client.

Since appearing on the show, she has been inundated with requests and regularly works on several pieces at a time to keep up with demand.

“I feel incredibly fortunate,” said Mrs Carter. “I have this absorbing interest and it has given me a sense of structure and something to focus on.

“It has been amazing having my work seen from as far as America and my career is going better than ever.

“Since going on TV, it has been absolutely bonkers. I’m doing commissions almost every waking hour.

“I started off doing one at a time, but now I have three on the go at the same time.

“James is so supportive. Our life has taken a bit of an interesting turn after me going on TV and all the commissions, but he helps me with the shipping. He is my rock.”

• The Pink Peacock is available from the Bell Book Shop in Henley and online.