Man parks vintage bicycle outside house for 10 years... and then it’s stolen 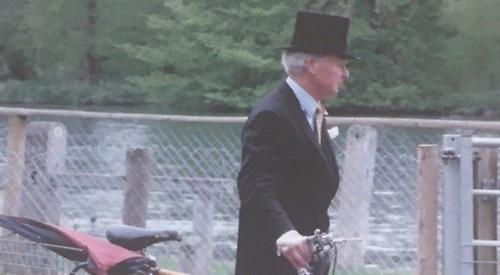 A MAN is furious after a vintage bicycle that once belonged to an Olympic rower was stolen from outside his home.

William Shine, 78, has been parking the 40-year-old black Dawes outside his home in Park Road, Henley, for the past 10 years.

It was stolen during Monday night last week together with a high-vis vest and a while helmet with his name on it.

Mr Shine has owned the bike for 15 years and used it to go to the shops and Upper Thames Rowing Club.

He said the bike has 10 gears but only three of them work and he couldn’t understand why someone would want to steal it.

Mr Shine said: “I was very upset when I found it was gone. Everyone knows it is my bike and no one would ever think to steal it. I used it to go to the supermarket, to the rowing club and then back home.

“I was bloody angry — why would anyone want a bike in such a bad condition? I live at the far end of a one-way street, so the theft had to be intentional but I fail to understand why.

“Whoever stole it would have to spend a lot of money to restore it to a proper condition.”

The bicycle originally belonged to Charles Wiggin, who won bronze in the coxless pairs at the 1980 Olympics in Moscow, and his wife Sally, who lived in West Street.

Mr Shine, a retired wine merchant who has lived in Henley for 30 years, met Mr and Mrs Wiggins through Upper Thames RC when they were all members. He found the bicycle in their garden when he was doing some work for them.

Mr Shine said: “Sally told me they didn’t use it anymore and I thought I could make it work. It needed some work because when I got it only two of the 10 gears worked but Henley is mostly flat so I thought I could use it and I have.”

He once cycled from his home along the towpath in a full morning suit, including a top hat, before getting on a boat to attend a wedding on Temple Island.

Liz Ledaca, one of Mr Shine’s neighbours, said: “He is a dearly-loved neighbour and is often seen peddling around town.

“We would love to see him reunited with his vital mode of transport. It seems unlikely it was stolen for monetary gain.”