How you can help protect planet in climate crisis 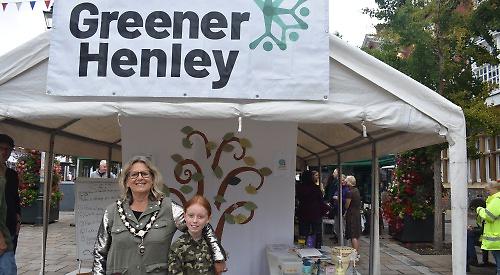 GREAT Big Green Week got under way in Henley on Sunday.

Stalls were set up in Market Place by environmental and other community groups where passers-by coud learn more about the initiative and were encouraged to think about what they could do to help protect the planet.

The event was the first of a series organised by Greener Henley to mark the week, which ends on Sunday.

Julia Samyui-Adams, a member of the group, said: “It’s about celebrating small wins, looking at what’s already going on locally in terms of climate action and work to protect nature.

“Everyone has heard all the bad news but we don’t always hear about the good things that have happened. All these things are run by volunteers so if people want to get involved, they can.”

At her stall people could contribute to a “pledge tree” by writing on a paper leaf one small thing they could do to help stop climate change.

As the pledges were added to the tree, children stuck insects on to it, showing the way the pledges would help the ecosystem.

There was also a stall where children could colour in beetles. This proved popular as parents who had just popped to the square for a coffee found themselves unable to drag their children away.

There was a swift nesting box on display and people were asked to consider if they had a space for one in their gardens.

Greener Henley is also looking for landowners who are willing to plant trees and there was a display showing the different soil types in different areas of the town, which would dictate the most suitable species for planting.

These included bamboo toothbrushes, eco-pens, soap and deodorant alternatives and scourers made of vegetable product which he said “do a proper job”. For those who use electric toothbrushes, there were toothbrush heads which can be sent back to the address on the packet to be recycled.

He also showed residents a device which can be attached to washing machines to filter out microplastics and prevent them from entering the water supply. The plastics collect as a black gloop in the tube which can be sent back to the manufacturer to be recycled.

Mr Fletcher was also selling galvanised metal watering cans and pointed out that “going back to old ways” could sometimes be better for the planet.

Representatives of the Henley Toad Patrol were also present. In the early spring they help toads get from one side of the Marlow Road (A4155) to the other without being squashed. They work at dawn and dusk and this year they helped 10,000 toads, frogs and newts.

The group wanted to raise awareness of its work, particularly among drivers using the road at those times.

Volunteer Nicola Taylor said: “We’re out there in high-viz jackets and we put up signs but it can be quite dark.

“This year we had to have people in pairs because of lockdown but it was a nice reason to be able to go outside.”

The Fairtrade group, Henley Wildlife Group and Sonning Common Green Gym were also represented. There was particular interest from residents in joining the green gym, which allows people to be outside and get some exercise whilst protecting and improving the environment.

This week 44 town centre businesses have put pictures of endangered species in their windows to create a trail for families to follow.

It will be attended by Greenshoots plant nursery in Rotherfield Peppard who will have a bad crop of potatoes to make potato prints.

Henley Car Club, Clean Air for Henley, Henley and Goring Ramblers and Henley Quakers will also attend together with fungi expert Professor Richard Fortey who will identify samples brought to him.

On Sunday Warriors on Waste will carry out a Thames clean-up to mark World Rivers Day, meeting at Val Wyatt Marine in Wargrave at 1.30pm (bring your own paddleboard).