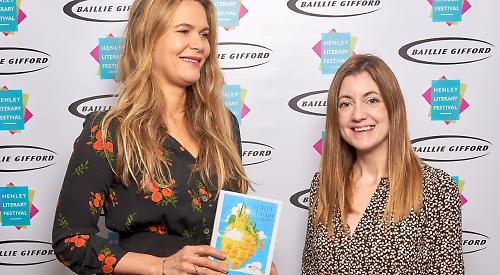 FRESH from headlining the Friday night of Henley Festival, Sophie Ellis-Bextor returned to Henley to speak at Henley Literary Festival.

With a career spanning 25 years, Sophie has released eight albums, embarked on six tours and can boast that she was the first voice to be played out of an iPod.

Having kept shattered parents grooving throughout lockdown with her popular Kitchen Disco, in July 2020 she launched her podcast Spinning Plates.

All of this, she was keen to point out, has been juggled with raising her five children.

Celebrating the launch of her new autobiography, also titled Spinning Plates, in which she reflects on “music, men, motherhood and me” over the course of an hour, she shared some of the things she has learned from balancing these competing demands.

The singer began by talking about growing up in London during the height of Nineties Britpop and recalled her beginnings as the lead singer of Theaudience, the band that would launch her career.

At this time, not only was she an emerging artist trying to navigate the music industry, she was also a young woman having her first experiences with men.

During the talk she disclosed that she had been manipulated by a partner in one of her formative relationships, an ordeal that she felt many young women growing up at this time shared, stating: “I think most of us have stories to tell like that.”

She suggested that this was partially because the discourse surrounding relationships was very different back then, observing that: “We’re much better equipped now with the vocabulary of what it is about those situations where we didn’t feel heard or we weren’t happy. We’re now able to articulate better what was actually wrong about that.”

Her reflections on her painful past and the knowledge she had gained in the process were refreshingly frank. She spoke openly about instances in which she felt that partners and journalists had got away with behaviour that we would now consider unacceptable.

One audience member in the Q&A was keen to know how she has handled misogynistic press coverage over the years, which prompted the star to recall TV appearances and print interviews in which male journalists set out “to shock” her by asking intrusive personal questions about her sex life.

The conversation then moved on to the musical collaborations that resulted in her meeting her husband, The Feeling guitarist Richard Jones, and falling pregnant six weeks after they started dating.

Ellis-Bextor joked that since meeting Richard, she has alternated between releasing albums and having babies, a quip which, as she pointed out, isn’t far from the truth if you look at her discography. She revealed that, as a working parent, she often struggles to take time for herself, saying: “Like everybody I find it quite hard — I feel really guilty staying away.”

But determined that modern mums shouldn’t feel guilty for taking time for themselves, she states in the blurb of her book that we shouldn’t be “afraid to smash a few plates for the sake of what we actually need, want and value”.

Ellis-Bextor competed in Strictly Come Dancing, reaching the final in 2013, and was keen to discuss her experience of the show.

Alluding to the notorious “Strictly curse” she informed us that the relationship between many celebrity contestants and their professional partners is often exaggerated for the camera.

Additionally, she called for greater emotional support for the celebrity contestants, recalling how the relentless physical proximity that the show demands left her feeling out of her depth as a reserved person concerned about how her husband might feel.

Unfazed by the tech issues that interrupted the interview, the singer came across as warm and witty, often following up her observations with a throaty chuckle.

Ellis-Bextor suggested that unlike many of her contemporaries (Britney Spears certainly springs to mind) she has managed to dance in and out of the public eye while remaining relatively unscathed.

This she attributes to her strong support network, saying: “I’ve got a really good group of people around me — family and friends — and I rely on their counsel enormously.”

She also expressed gratitude to her fans for her continued success and recognised that she, unlike other female singers who emerged at a similar time, had largely managed to dodge the arbitrary and incessant badgering of tabloid newspapers.

I understand that the public, plagued with images of nannies, exclusive crèches and expensive strollers, might struggle to extend their sympathy to a pop star who has written a book about motherhood. However, to me, Ellis-Bextor came across as a self-aware celeb and her book seemed to be written from a place of sincerity.

As her Kitchen Disco live streams have shown, no one, no matter how many albums they might have sold, is immune from a sword-brandishing child in a superhero costume interrupting them when they’re trying to work.