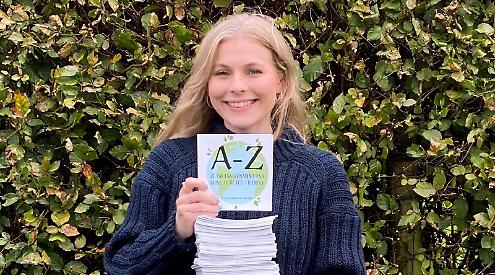 A WOMAN has turned her university project into a book for schoolchildren.

Maisie Webb, of St Andrew’s Road, Henley, had the children’s book, called A-Z of the Environment and Being More Eco-Friendly, published after being asked for 70 copies by St Mary’s School.

The 23-year-old, who studied publishing at Oxford Brookes University, had given a talk at the school about her work.

She said: “When the school emailed saying they would like to buy 70 copies I was like, ‘Yes, this is brilliant’. It’s very exciting as it’s not what I had intended to do.”

Miss Webb, who works in design and marketing for Humphreys of Henley in Bell Street, wrote the book as part of her final year university project, which required her to write something that she was passionate about and could be published.

She said: “I wanted to create a children’s book about the environment. It’s something I have a real passion for and I knew there wasn’t a lot out there for children that encouraged sustainability without having a change of lifestyle or costing a lot of money.

“I started by doing a lot of research about what was already available, such as books, games, activities and apps.

“My research found there was a gap in the market for another children’s book so I started to look at what illustrations would be best.

“I wrote, illustrated and designed the book as I knew what children of that age would enjoy.

“I made sure the pictures were colourful and the writing was simple. I chose to do the A to Z of the environment so for example, the letter A is for ‘air’.

“I talk about how the air is dirt and how we can improve it with things such as walking to school or taking their own bags when shopping with their parents. It has a whole range of things that children can understand and do themselves.”

Miss Webb, who attended Trinity Primary School, Gillotts School and Shiplake College, finished the project in April last year and had about eight copies printed, including the one she handed in to the university.

The book was awarded a first-class grade and Miss Webb graduated with a 2:1 degree.

After graduating, she approached St Mary’s School as she had worked in the nursery there for a couple of months about three years ago and had kept in touch.

Miss Webb said: “They said they would like me to talk to the pupils about my book.

“The children absolutely loved it and were asking so many questions. They were telling me how they were being sustainable and saying how excited they were to do other things — it made it all worthwhile.”

The other 30 were sold to friends and family and people who had messaged her on Instagram asking for a copy.

Since then, Miss Webb has visited Rupert House School in Bell Street to talk to pupils about the book and the Bell Bookshop is stocking some copies.

“It’s all just so exciting,” said Miss Webb, who lives with her parents Tim and Julia and younger sister Abi.

“My parents were proud as they helped me through university and gave me advice, so when the book was printed they were really happy.”