With so much space on board it's ideal for growing families 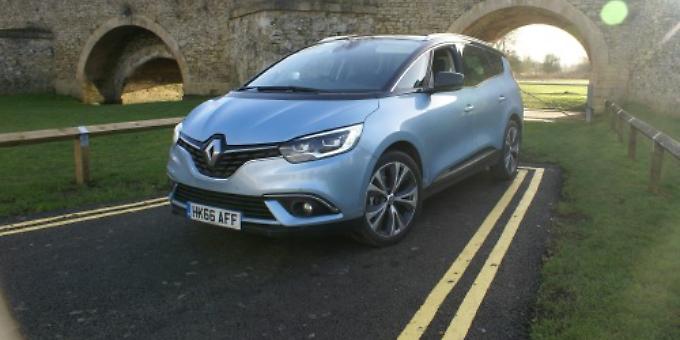 YOU might think that with Brexit permeating our everyday lives that this might prove to be a nervy time for Europe’s top carmakers.

However, Renault UK for one experienced further growth here in 2016, reaching a five-year high of 85,102 car sales.

The French brand was up 12.5 on 2015 outpacing a market that grew by two , according to official figures by the Society of Motor Manufacturers and Traders (SMMT).

With the introduction of all-new Mégane and all-new Scénic, Renault now claims the “youngest model range in Europe and a refreshed family car line-up”.

The fourth generation all-new Renault Scénic and Grand Scénic have been awarded the title of Best MPV at the UK Car of the Year Awards 2017.

This week I have been driving the 2017 seven-seat Grand Scénic and have to say I found it as satisfying a drive as ever.

Renault was a pioneer of the MPV (multi-purpose vehicle or people mover). The first production vehicle to be described by that term was the Renault Scénic, which was voted car of the year in Europe on its launch in 1996.

I have fond memories of those early MPVs and making the most of their greatest attribute of being true family vehicles.

It was this commitment to designating more space for families that brought MPVs to the fore in the first place.

They may have been overshadowed these days by crossover SUVs (sports utility vehicles) but that idea of getting much useful room from a vehicle as is humanly still holds sway with growing young families.

The five-seat Scénic and bigger Grand Scénic, with 20-inch wheels as standard, are available with numerous safety and convenience features.

The UK Car of the Year (UK COTY) Awards judging panel is made up of 27 motoring journalists who assess more than 100 new cars to produce winners in 12 categories, from which one overall champion is chosen.

Indeed, John Challen, managing director of the UK COTY Awards, said of the new Scénic and Grand Scénic: “For situations where space is a must, especially for a large family, the Renaults get it spot on. Practicality to a whole new level in a pleasant environment.”

Other judges reaffirmed the fact that no matter how you dress it up in whatever fancy terms — crossovers and the like — what matters is of space.

“The Scénic gets so much right for families, it just has to be the winner in this sector,” was one of the comments. As well as being the only vehicles in class to provide Active Emergency Braking System (AEBS) with Pedestrian Detection as standard across the range — gaining a five-star Euro NCAP rating — the All-New Scénic and Grand Scénic are also available with a range of active and passive safety features such as Lane Keeping Assist, Fatigue Alert, Blind Spot Warning, Safe Distance Warning and Traffic Sign Recognition.

Top technological features such as an 8.7-inch portrait touchscreen and the Multi-Sense driving mode selector are available on a compact MPV for the first time.

The All-New Scénic and Grand Scénic are each offered in four trim levels – Expression+, Dynamique Nav, Dynamique S Nav and Signature Nav and each version a good standard specification.

A feature carried over from the new Espace, the One Touch Folding rear seats can be folded effortlessly to achieve a flat floor.

The model is the only vehicle in its class in which this function can be activated from two different places: from inside the boot or by using the R-LINK 2 multimedia system in the dashboard.

Other storage solutions include four underfloor compartments, to extend total cabin storage capacity to 57-litres, placing the Scénic at the top of its class by offering up to twice as much space as its competitors.

Key features on all Dynamique S Nav include: