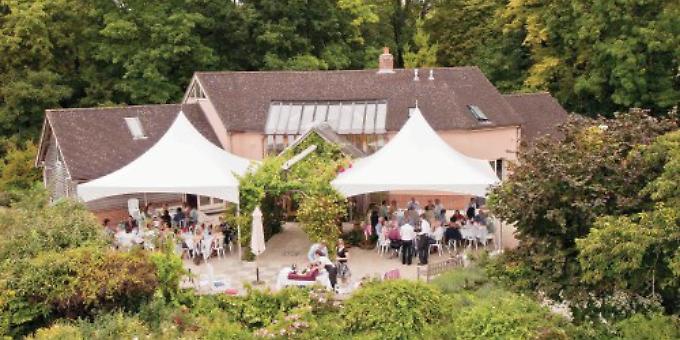 Property correspondent LUCY BOON took a country stroll to Streatley, where a Grand Designs-featured home in an Area of Outstanding Natural Beauty could soon be facing a remodel

EVERYONE loves a good barn conversion. Don’t they?

Well, according to recent figures from funding firm Saving Stream, the popularity of agricultural building conversions is on the wane.

It reports that the number of barns being converted into residential properties has dropped by a quarter in 2016. Conversions dropped to 413 from 563 for the same period in 2015.

Whether this is due to a change in people’s finances, the fact that there are fewer agricultural buildings left to be converted, or perhaps because of a change in our mentality, remains to be seen.

This last could be explained by the fact that, although traditional barns are very nice to look at, they are not necessarily the best choice for modern living. They were not built to be lived in, after all.

Plus, with converting an old building, there is always the danger of losing that sense of space and beauty that make it special in the first place.

Denys and Marjorie Randolph faced this conundrum when looking for their “last home”.

They wished to find something that suited their needs in their retirement (Denys had been chairman of Wilkinson Sword). But they didn’t want to compromise on olde English charm.

“They didn’t want to just put a conventional house inside a barn,” said Tim Sherston of Goring agency Jackson-Stops & Sons, which has experience of extensive properties, both old and new. “It would have meant losing some of the appeal and integrity of the original building.”

Instead, the Randolphs bought an old bungalow with lots of land — a stunning location with far-reaching views of the Chiltern hills — razed it, then employed Devon-based architectural firm Roderick James to design their dream retirement home, using newly felled or green oak (i.e. fresh off the tree).

The brief was a house that had all the qualities of a traditional oak barn, that sat well in its rural surroundings, but that was designed the way they wanted it. Around 40 trees were needed for the project.

This was not to be a rehash of a converted barn — the house is a mix of the old and the new, melding new technology with traditional craftsmanship.

Engineer Denys chose integrated underfloor heating, a self-contained ground-source heat pump and rain-fed water tanks disguised as terrace ponds. This last may sound pretty normal today, but back in the Nineties this was all somewhat pioneering.

(So efficient is the build, that son-in-law Bob Nielsen told Standard Property the yearly electricity and heating bill for the entire property is around £1,200. Not bad for 2,840 sq ft.)

After a two-year build, the house, named Ickleton Fields after the ancient name of the Roman road it is located on, was finished in 1998. (Lest we forget, there’s an inlaid mosaic coat of-arms, with the Wilkinson Sword crossed blades and a date stamp, on the terrace.) And the Randolphs were ecstatic with their finished home.

Constructed from a beautiful-quality exposed oak frame with rendered and oak-clad elevations under a clay tile roof, the layout of the house puts the seriously impressive Area of Outstanding Natural Beauty view of the Chilterns valley centre stage.

As such, the main part of the house — the atrium — is positioned to take advantage of the view, which stretches out along the Thames. (You can see where the river is by following the tree line.)

The atrium is also the main entrance point for the house, which is mirrored on the opposite side by French doors to the garden terrace.

“Denys and Marjorie wanted the terrace to be larger than the atrium as they were big on outdoor entertaining,” says son-in-law Bob. “With marquees up out there, you can seat close to 150 people.”

When needed, an electric sunshade/rain cover opens out over the terrace’s vine-covered pergola at the touch of a button. Very handy.

But this is no summer house. The excellent build quality makes for a semi-constant temperature year round, plus there’s a lovely fireplace with wood-burning stove to cosy up to. The atrium is, after all, the living room, dining room and entertaining room all rolled into one.

This heart of the home was the perfect size for two people in their later years, with a penchant for a party. However, the new owners may decide they need more space.

“No problem,” says agent Tim Sherston. “The construction of Ickleton Fields makes extending a cinch. Architects could really go to town with all kinds of wonderful options.” The upstairs part of the atrium features a timber bridge that stretches between a library on one side and a guest suite on the other. (This last contains a double bedroom, bathroom, study and kitchenette, plus its own outdoor entrance staircase.)

Now you’re upstairs, you can more easily get up close and personal with all that lovely wood. Much like you can see with the construction of a 600-year-old barn, here you can identify the traditional constructions of the beams, joists, wedges and pegs, using the age-old post and tie beam method. Just like a real Tudor barn, no screws or nails were used in the construction of Ickleton Fields. It’s a veritable 3D jigsaw puzzle.

Kevin McCloud of Channel 4’s Grand Designs was seriously impressed with this when he took a peek during construction. He said: “Wood shrinks as it dries, which gives it the strength of tensioned steel. Like all those ancient buildings our nation is known for, this one will last for centuries.”

The house was featured in the show’s very first series.

“Green oak ages beautifully,” continues agent Tim Sherston. “About 18 years after the build, you can see those lovely lines and cracks in the timber — it’s lost none of its soundness but has simply increased in character.”

Standard Property would like readers to note that any cracks you see in old beams are just superficial and do not penetrate through to the hard wood.

Back downstairs, the ground floor of the right-hand wing contains the kitchen and utility room, as well as the master bedroom suite with its double bathroom and sauna.

The opposite ground-floor wing contains an office (bedroom three, if you like) and the double open-on-one-side garage.

In the back garden, the vast terrace overlooks an extensive flower-filled meadow with garden sculptures and a purpose-built mini-lake at the far end.

Kevin McCloud initially found the finished terrace “far too high and too big”, then changed his mind when he revisited the property.

But whatever the new owners decide to do (or not) to the house, we’re sure Kevin would be interested to see what happens next.

l Bathrooms: three (including the master bedroom suite, which has a whole bathroom each)