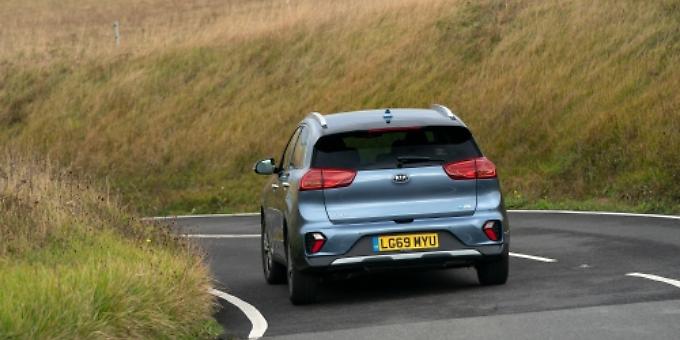 THIS is a tale of two new cars made by Kia, both of which had the now requisite ingredient necessary for 21st century motoring — electric power.

One was a new EV (electric vehicle), the other a hybrid. They were the Kia Niro 1.6 GDi PHEV, and the all-new Kia Soul EV (more of which later).

It may be that the hybrid or PHEV (plug-in hybrid EV) turns out to be second choice in future years to a fully functioning EV. Yet the hybrid for now seems a viable alternative to conventionally powered cars.

Certainly, the Niro PHEV impressed me as much as the Kia
e-Niro EV I tested recently whose attributes included being perfectly easy on the eye and not looking peculiarly electric.

This is important because if electric cars are going to eventually replace conventional models, they have to look the part and not stand out as oddities.

The hybrid phase of car production continues to be popular. Hybrid sales in the UK and Europe have doubled over the past five years and are expected to reach 700,000 annually by the end of this decade, all other things being equal.

The Niro PHEV was nothing if not practical. Its design lines are that of a conventional car and while this might not send your pulse racing, the car (in its grade 3 form) was handsomely turned out.

The car has an all-new powertrain that features a 1.6-litre, 104bhp internal combustion engine and a 32kW (43bhp) electric motor driving through a six-speed dual-clutch automatic transmission. Fuel economy allows up to 201.8mpg with CO2 emissions from 29g/km.

The Niro PHEV is good to drive with nice, lightweight handling. I found it comfortable and well equipped, right down to electric seats and an electrically heated steering wheel (now the go-to feature I need on any new car).

The Niro PHEV is available with a choice of two grades — 2 and 3. There are also new eight-inch and 10.25-inch TFT widescreen displays, with grade 2 featuring the former and 3 having the latter as standard equipment.

Grade 3 models — the car I have been driving — also feature black leather upholstery with blue stitching, while all versions get a 4.2-inch TFT (Thin Film Transistor) full-colour supervision cluster as standard.

Accessible via the 10.25-inch touchscreen and the owner’s smartphone, UVO Connect features a new Kia Live system, which uses its own in-built chip card to retrieve and update live data.

The second element of the UVO system is the UVO App, designed for compatibility on Android and Apple smartphones.

I went to the UK launch of the all-new Kia Soul EV, which was held near Henley. I hope to review this new EV in full in a future column.

I was prepared not to be overly impressed with the new Soul, now in its third generation. But I was won over by a bright, light car that came as a breath of fresh air among the growing band of EVs available.

This new Soul had a sense of fun about it, laced with an attractive boxy design. What I particularly liked was the ease of access to all parts of the car, particularly the front seats of a model classed as an urban crossover.

The Soul EV is powered in Europe exclusively by electric energy, with a zero-emissions powertrain.

Actually, Kia now has electrified versions of the Niro, Soul and Sportage, and has expanded the line-up further with the launch of PHEV versions of the all-new Kia XCeed and the Ceed Sportswagon.

A 1.6-litre GDi engine combined with an electric motor and 8.9kWh battery pack to produce 139bhp and 265Nm of torque powers each of these models.

A Combined Charging System (CCS) DC fast charger is fitted as standard, enabling shorter stops for charging. The battery pack can be recharged from 20 to 80 per cent capacity in just 42 minutes using a 100kW DC fast charger.

The Soul EV is also equipped as standard with Kia’s innovative smart regenerative braking system, operated by paddle shifters behind the steering wheel.

The system provides drivers with the ability to slow the car and recuperate kinetic energy to maximise its driving range and efficiency.

Drivers can choose from four regenerative braking levels (none or one to three), depending on the level of energy recuperation they desire from the brakes.

The long-range 64kWh Soul EV can travel up to 280 miles on a single charge.

• The first plug-in hybrid compact crossover on sale in UK

• Capable of travelling up to 36 miles on battery power alone

WHEN the Seat Ateca arrived on the market it was the Spanish carmaker’s first ever venture into the ... [more]

THE antecedents of this week’s drive, the Citroën C5 Aircross go back into the mists of time when ... [more]